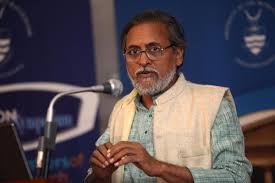 Professor Anil Gupta, International expert on strategy, globalization and emerging markets, has urged Nigeria to embrace the manufacturing sector and rise above its present celebratory tag of fastest ‘emerging’ economy. In his i paper titled ‘The rise of Nigeria and the task ahead’, presented at FBN Capital’s 4th Annual Investor Conference themed ‘Lifting the lid on emerging Nigeria’ held on November 11, 2014 in Lagos, Gupta said Nigeria which is the fastest growing economy second to China has a number of factors that have placed it in a favorable position for further growth, but needed to look away from the fleeting success and focus on developing its manufacturing sector among other development index deficits.

“Size matters, and is a foundation to building a strong manufacturing sector. Manufacturing is what China and India did and it is what Nigeria will have to do” he said, adding that young people are huge assets to any country.

Apart from the nation’s size which, if put into efficient use can boost manufacturing, it can also boost research and development, Professor Gupta said while discussing his ideas on how Nigeria can handle the “too big to ignore” tag which comes with the elevated position the country finds itself after the rebasing.

“Nigeria is now the number one destination for foreign investors in Africa but still faced by some challenges such as Insurgency which is a serious issue and is becoming one of the central issues facing the country” he said. He also identified power, falling commodity prices, oil theft, and the significant challenges of infrastructure deficit

He called for, as priority, the building of physical infrastructure which is essential for the success of the manufacturing sector.

Also speaking at the event, Bismarck Rewane, Managing Director, Financial Derivatives Company, said there is an infrastructure gap in every respect. “We need revenue. If we don’t have, then we need to borrow. As a borrower, Nigeria is more disciplined than as a non-borrower.” he said.

Speaking further, Rewane said the presently falling oil prices, which may be seen as a major challenge for the country might actually be a blessing in disguise as the nation fares better when she is revenue challenged than when she is financially comfortable.

According to him, there is a fiscal shortfall which has led to revenue shortfall. “Reserves have all come down. The excess crude oil account is down to $1.4 billion. Nigeria has always done better when revenues were low than when we were comfortable” he said.

“There is a global shift in currency values, lets accept the reality,” he said, but added that dollar strengthening does not mean naira weakening. He said that as the prices of oil have fallen; subsidy should come down sharply which should also enable the government to invest more in infrastructure.

Over the last three years, FBN Capital Limited has explored key aspects of Nigeria’s economic evolution as it transitions from a frontier to an emerging economy through an annual investor conference. The focus of this year’s conference addressed how Nigeria can capitalize on the recent GDP rebasing which has propelled it to the position of the largest economy in Africa, and also looked to shine the spotlight on previously under-represented fast-growing sectors of the economy which the recent rebasing has brought into focus.

The FBN Capital Investors l conference is an annual event and attracts participants across the public and private sectors in Nigeria as well as delegates from other countries to share insights that would be valuable and relevant to varying sectors as the nation’s economy evolves and progresses in phases.