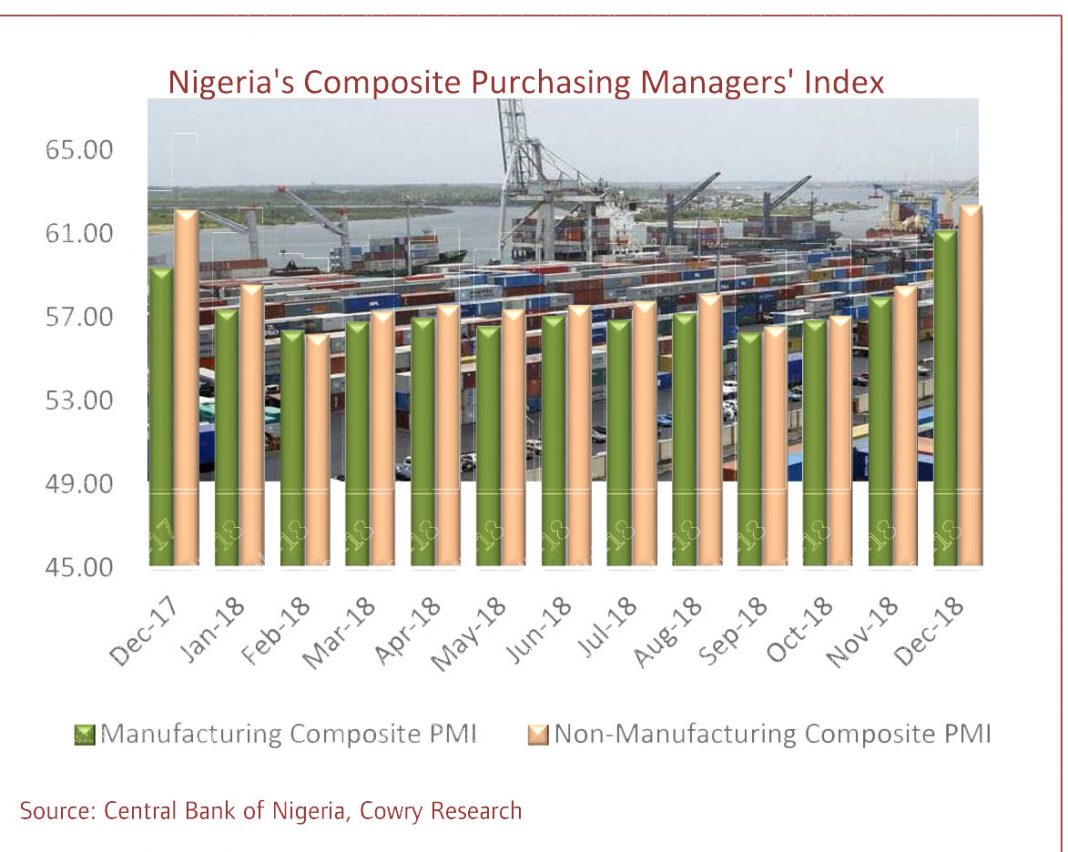 Recently released Purchasing Managers’ Index (PMI) survey report for December 2018 showed faster expansions in both the manufacturing and non-manufacturing businesses in line with anticipated increase in demand associated with the “seasonal” festive month coupled with electioneering spending activity. According to the survey, the manufacturing composite PMI rose to 61.1 index points in December 2018 (faster than 57.9 in the preceding month), the twenty first consecutive expansion.

In the same vein, more hires were recorded by manufacturers to cater to increased demand as the index for employment rose to 57.0 points (compared to 55.4 in November 20187). Following higher input demand, input prices rose to 61.3 (from 57.8 in November 2018); although output prices expanded slower, to 51.6 (from 51.9) as manufacturers could not pass on rising input cost to the final consumer.

Of the fourteen manufacturing sub-sectors surveyed, ten sub-sectors (or 71.43%) recorded faster expansions (higher than nine sub-sectors in the preceding month). Notably, manufacturers of ‘Printing & related support activities’, ‘Textile, apparel, leather & footwear’ and ‘Transportation equipment’ registered the sharpest expansion in activities of 66.0 (from 56.9), 65.7 (from 51.8) and 70.0 (from 57.4) respectively.

Also, the non-manufacturing sector extended its advance at a faster pace as the non-manufacturing composite PMI rose to 62.3 in December 2018 (from 58.4 in November 2018), the twentieth consecutive expansion. This was partly driven by faster expansion in business activity and incoming business to 65.2 (from 60.4 in November 2018) and 63.1 (from 57.5) respectively; while employment level and work in progress increased to 57.9 (from 56.2) and 62.8 (from 59.6) respectively.

The sustained weakness in global manufacturing is indicative of slower global demand and is a worrisome development, in the worst-case scenario, for a resource dependent country like Nigeria which heavily relies on its crude oil exports for its economic growth and revenue. In the best case, however, a cessation of the trade spat between the U.S. and China, whilst in their 90-day truce which lasts till March 01 2019, could spark some hope and help renew global business confidence whilst stimulating global demand – especially for crude oil which is a critical global input for businesses and key income source for resource dependent economies such as Nigeria’s