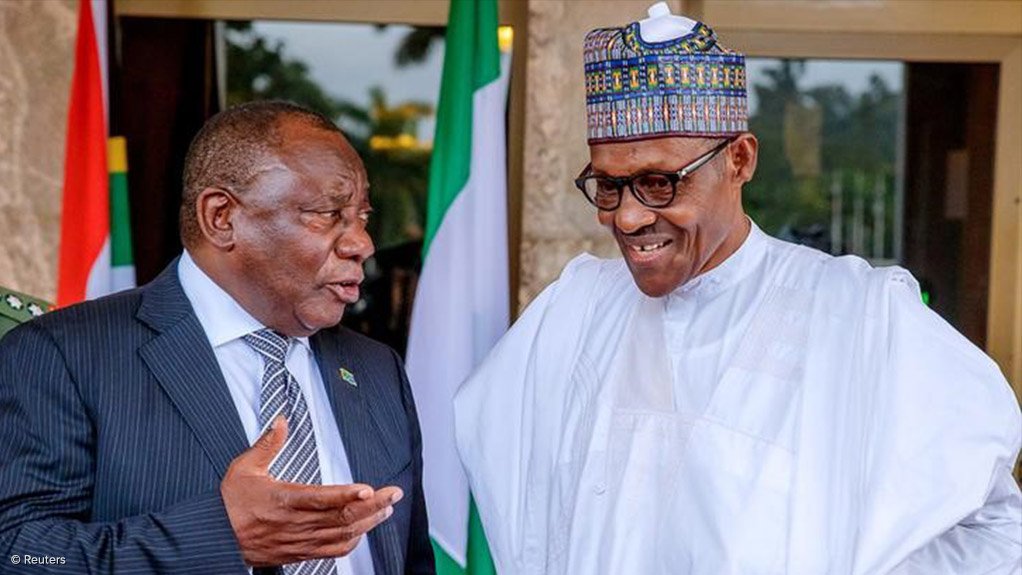 South Africa’s President Cyril Ramaphosa elected two weeks ago has announced a leaner more purposeful cabinet hailed as one right for the time but in Africa’s most populous country, Nigerians wait for their President Muhammadu Buhari to name his cabinet three months after he was elected and a day into his new term of four years.

Ramaphosa’s new executive comprises 28 ministers, down from 36 previously while the mineral resources and energy ministries were combined and will fall under Gwede Mantashe, who previously held the mining portfolio and had helped heal a rift with the industry.

Analysts said Ramaphosa seems to have taken a prompt step towards putting Africa’s most industrialized economy on a growth path and fighting graft by naming a slimmed-down cabinet that retained Finance Minister Tito Mboweni and Public Enterprises Minister Pravin Gordhan in their posts.

There was no place for Jeff Radebe, the longest-serving cabinet minister, who had headed the energy portfolio.

Whenever Nigeria’s The 76-year-old former military leader appoints a cabinet, his government will need to tackle a growing list of challenges, including combating a sluggish economy, high unemployment, and a decade-old Islamic insurgency and general insecurity including rampant kidnapping now swirling around the commercial city of Lagos.

His four-year first term, in which he rarely gave public addresses, was overshadowed by speculation about his health and marked by a long absence abroad for medical treatment. But he won a clear endorsement in February’s election with 56% of the vote.

Buhari will need to change his tact, promote badly needed reforms, open up the economy in the hope of creating jobs and turning around the country’s fortunes over the next four years. Nearly a quarter of the workforce is unemployed and most of its 190 million people live on less than $2 a day.

“Our expectation is that Mr President will now focus more on the issue of security, employment and agriculture because these are the core areas,” said Basil Ejidike, who chairs the APC in southern Anambra state.

Some social media users were critical of the absence of a speech. Software developer Tosin Olugbenga called it a “missed opportunity”.

“It is an opportunity for the president to speak to Nigerians and give further assurance of his commitment to a better Nigeria,” he said in a tweet.

But this second term means Buhari now has a second chance to turn campaign promises into policies aimed at stimulating economic growth. Nigeria’s economy grew by 1.93% last year, its fastest pace since the recession. Growth of 2.1% is forecast by the International Monetary Fund (IMF) for this year, though that would be among the slowest rates in Africa.

Despite his large winning margin, the next four years won’t be easy for the former general. Bloomberg lists some of the key issues he’ll face while at the helm of Africa’s biggest oil producer and most-populous nation to include-

Growth and Inflation
Nigeria’s economic growth has slumped since the 2014 crash in crude prices and Buhari is struggling to revive it. The International Monetary Fund forecasts that gross domestic product will expand 2.1% this year, which would make Nigeria one of Africa’s slowest-growing economies and mean that growth is negative in per capita terms given that population is growing at a faster rate of 3%. Inflation is at 11.4% and has been above the central bank’s target of 6% to 9% for almost four years.

Revenue and Debt
Since so few Nigerians and companies pay tax, the nation has one of the lowest revenue-to-GDP ratios in the world at about 7%. Debt service in Nigeria gulps over 50% of revenues. And still the government believes it can afford massive subsidy on petrol and other measures like holding on to state enterprises that have become a drain on the treasury. That leaves the government with little money to spend on schools, hospitals and infrastructure. In March, the Debt Management Office told Bloomberg it will avoid Eurobonds and instead prioritize concessional loans from the likes of the World Bank to lower its finance costs.

The Naira
Foreign investors’ biggest gripe over the past four years was how Nigeria handled the naira in the wake of the oil crisis. Central bank ramped up capital controls in a bid to stop the currency depreciating. There’s a system of multiple exchange rate windows in place that critics, including the IMF, say is opaque and deters investment. Many also say the naira overvalue with Renaissance Capital estimating it should be about 20% weaker against the dollar.

Foreign Investment
A slump in foreign direct investment since the early part of the decade has accelerated under Buhari, whose administration has come into conflict with major investors and companies including MTN Group Ltd. and JPMorgan Chase & Co. Even investment into the once lucrative oil and gas sector which used to be a magnet for investors has slowed considerably on the back of wrong headed policies. Last year, FDI flows into Nigeria totalled a mere $2.2 billion for an entire year, less than a third of the amounts smaller populations like South Africa and Egypt attracted.

Fuel and electricity Prices
Buhari’s government has maintained low gasoline prices and below viable tariff for electricity, believing they’re one of the few benefits that Nigerians get from the state. Petrol is capped at 145 naira a litre ($0.40, or $1.51 a gallon), which makes Nigeria the sixth cheapest country in which to fill up your tank, according to GlobalPetrolPrices.com. This indulgence cost almost nearly a trillion Naira every year in a nation where the number of children dying before they turn one is rising. The government has so far resisted calls by the World Bank to raise petrol price. Many blame the poor electricity supply from the grid and the lack of investment into the sector on the low tariff which far below cost.

Oil and NNPC
One reason for optimism about the economy is rising crude production. It climbed to 1.9 million barrels a day in April, the highest level in more than three years, as Total SA’s massive Egina offshore field came on-stream. Investors will hope that Buhari encourages more deep-water developments while also cleaning up Nigerian National Petroleum Corp., the state-owned energy company that opposition politicians say is blighted by graft and mismanagement.

Blackouts and Gridlocked Ports
Nigeria has long suffered from dire infrastructure, not least its power network and ports. Buhari has struggled to fulfill his pledge to end constant electricity outages and chaos at the country’s main ports, both of which weigh on economic growth.

Islamic State and Boko Haram
While Buhari managed to win back territory in the northeast held by Boko Haram when he first came to power, a breakaway faction allied to Islamic State is gaining strength and regularly attacks army bases and convoys. That’s one of a string of security problems that have escalated in recent years. In other parts of the country, clashes between farmers and herders over grazing land led to around 2,000 deaths in 2018, according to Amnesty International.

Corruption
Buhari’s popularity with voters is largely because of his promises to fight corruption. While he says his administration has done much to cut graft in the public sector, critics complain that he lacks a clear strategy and that he’s used his anti-corruption campaign to go after political opponents.

Booming Population
One of the biggest long-term issues facing Nigeria is its rapidly-growing population— the United Nations expects it to double to 410 million by 2050, overtaking every country bar India and China. While some investors see that as a reason to move into Nigeria, others say it threatens social and political stability in a country whose government already struggles to provide basic services and which has more extremely poor people than any other.