Senate and the ‘Doctrine’ of Bow and Go’ 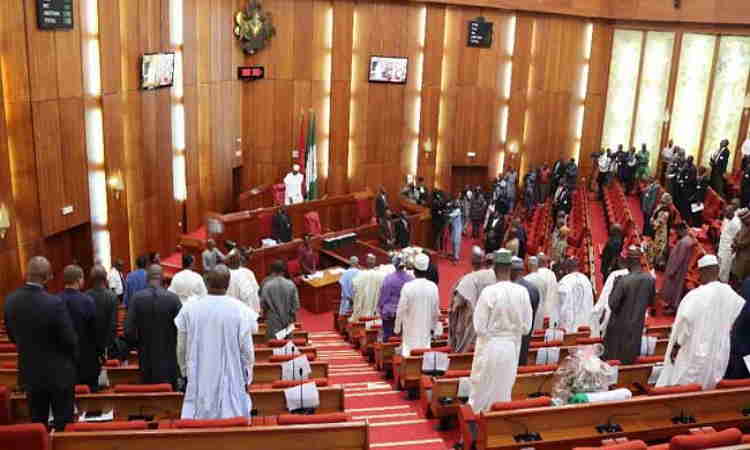 Viewed objectively, it will not be a wrong assertion  to conclude that the global object of strategy as used in battlefield, politics and other fields of endeavours, to bring conditions most favourable to one’s own side, judge precisely the right moment to attack or withdraw and access limits correctly was disproportionately exploited recently by Nigeria’s 9th Assembly Senators screening the ministerial nominees to favour their former Senators that made up the ministerial list forwarded by President Muhammadu Buhari to the for screening.

For some days, Nigerians have helplessly watched the Senator Lawan led Senate, cleared about half of the nominees telling them to take a bow and go just because they were former senators without minding whether they (ex-senators) are familiar with the magnitude and urgency of our problem as a nation or laced with the requisite knowledge that the ministerial positions demand to help the nation come out of its present predicament.- an action that has characterized the process as a familiar music hall act.

Fundamentally, apart from this ‘‘doctrine’’ looking curiously old-fashioned, and lacking precise judgement, the practice neither squares up with global leadership’s best practices nor in harmony with moral laws.

The above position is supported by precedence.

The case of Hillary Clinton- a one time senator and wife of the Former President Clinton remains a particular evidence in the contrast between Nigeria and the United States of America. It is factually backed that before she was sworn in by the D.C. Court of Appeals Associate Judge Kathryn Oberly as the 67th U.S. secretary, she was not only grilled  for hours by the Senate- despite being a former senator, but  had the likes of  Senator Jim DeMint, R-South Carolina, and Senator David Vitter, R-Louisiana opposed her confirmation.

In our situation, possibly the most alarming factor that set the stage for this appaling situation is the Lawan led-senate failure to use strategic insights in acceptance for screening, a  Ministerial list that was silent about portfolios.

Regardless of what others may say, this senate policy of ‘bow and go, and ambiguity of portfolio indicates that Nigerians may be in much trouble than we actually realized. It also rings the apprehension that unless the senate who are currently occupied in the doctrine  comes to terms with the harm they are doing to the nation and reverse such with the urgency that it demands, the nation may be having a greater crisis on its hands.

Going by this line of reasoning, it will necessitate the posers as to; whether Nigerians should keep quiet and allow this to become a tradition in the senate. What of the future? Will it be marked by similar types of the past period? And who should be the judge? Or must we as a nation allow the trend like good and evil go on together without allowing our nation to reap whatever fruit that comes in the nearest future?

Obviously not- as we are currently in the dire strait- that urgently calls for improving performance in every sector- economy, education, youth development, energy and powers and others. And allowing the pleasure of ‘bow and go’ can only be an option if it is clear in which direction the nation is going. And the choice of that direction is important and must be determined by the quality of people in charge.

Very important, what the Lawan led senate should be aware of is that the question is not what the Ex- Senators have done in the past as Senators. It is about Nigerians knowing before hand what they intend to do when they become ministers, and whether it will be in the interest of Nigerians.

Nigerians need to have this information because we need good people to have good government. Particularly, now that the nation needs as ministers people who are sensitive, have insight and inquisitive minds that can help challenge the status quo. Currently, Nigerians need as ministers people with a balanced perspective; that cannot afford to be specialists who know only one thing but the integrative problem-solvers.

Not allowing these ministerial hopefuls tell the over 200 million Nigerians of their plans and programmes as well as what they are bringing to the table is an indication that the Senate as an arm of government is yet to recognize that we are all ‘soldiers in the development army and have the same ranks and tasks that exist in the traditional army’. And erroneously depicts its members (present and past) as all-knowing, more generous, more nationalistic, selfless, honest, kind, and intelligent or good looking than others. This cannot be the true position.

In my understanding, the  President, Governors, Senators and others are in the front line of development and are entrusted only to the most crucial mission not that they are more important than other citizens in the quest to secure victories in the development wars.

Knowing the capacity of our ministers have become urgently imperative as we are convinced of the need to change, but we must determine our pace towards change and choose our priorities. If we are not convinced, the world will impose change on us and we will be left with no option. Worse still, if we do not choose our own pace of change, the world will dictate it for us’.

Looking ahead, If truly a people-purposed leadership is what we seek if the accelerated economy is our goal, if social and cultural development is our dream if promoting peace, supporting our industries and improving our energy sector forms our objective, then the senate has to look for a way to get  this house rule and privilege suspended.  And in its place come up with an effective mechanism that will help throw upright and competent men for public offices.

Finally, the senators must learn some valuable lessons from the case of Hilary Clinton mentioned above and similar ones. They must not stop learning in this direction as the situation keeps changing. The government in Nigeria must learn to adjust to new policies that will bring a people purposed leadership in the country.