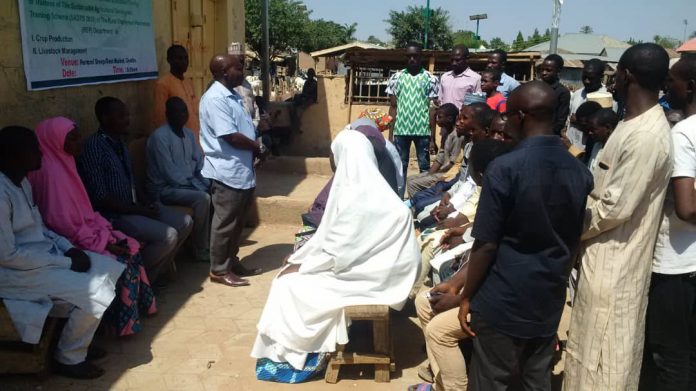 By our Taraba correspondent

Both the World Bank and the Federal government of Nigeria as well as the Taraba state government were said to have pooled resources together to conduct a skill training programmes for no fewer than seven hundred and twenty youths from poor and vulnerable households in the state.

The Director General of the National Directorate of Employment (NDE) ,Dr. Nasiru Ladan Mohammed Arugungu ,who made this known at the orientation ceremony of first cycle of Skills for Job (S4J) training under the Youth Empowerment and Social Support Operation (YESSO) at the Jalingo campus of the state polytechnic , said the S4J component of YESSO which kicked off with the first cycle train about two and half years ago “has being working in conformity with international best practices. ”

Represented by the State coordinator of the directorate, Alhaji Adebisi Aderem the DG said “it is indeed encouraging to have the World Bank believing in. the management of National Directorate of Employment to lead the implementation of S4J in the participating states. ”

“The capacity of the NDE as the leading federal government agency in skills acquisition, job creation, empowerment generation and poverty reduction in Nigeria “according to him “has once again been demonstrated across the sixteen states that currently participating in S4J Pilot training “stating that “Taraba state is inclusive. ”

Urging the beneficiaries to maximize “this uncommon privileged so that you can have a hope of a better life at the completion of your training “the Choice of the polytechnic environment, as stated by him “is not by chance but because of their fulfilment of adequacy for the first level skills training. ”

On his part, the State coordinator, through his deputy, Albert Olorunniyi, said over five thousand trainable members of poor households were identified and registered across the state for skill for jobs stating that )))the State Operations Coordinating Unit (SOCU) of Youth Empowerment Social Support Operation (YESSO) has made available the single register from where seven hundred and ninety eight were mined adding that “NDE skill for Jobs officers were on the field where they verified seven hundred and twenty for the training. ”

Stating that the government at the National level and state levels “have deep concern for the unemployed because they are their citizens who deserves decent living which is only through decent jobs ” this he said has made “our leaders explore all avenues to provide means of livelihood commiserate with great Nigerian citizens. ”

Overwhelmed by the development, the Rector of the polytechnic, Ayuba I. Abarshi, said relevant security measures have been put in place by the School authority in order to enable the beneficiaries carried out their trainings effectively.

He charged the beneficiaries to take advantage of the the opportunity by “not only coming out to be self reliance but also as employers of labour. ”
END