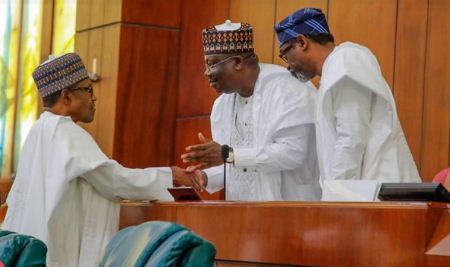 President Muhammadu Buhari has sent a letter of request to the Senate seeking approval for the federal government’s 2016-2018 external borrowing plan.

The President in his letter, recalled that he had earlier sent the loan request originally estimated at $29.960 billion in 2016 to the eighth National Assembly under the leadership of Dr. Bukola Saraki, but it was not approved.

He highlighted that only the federal government’s emergency projects for the north-east and one China-assisted railway modernization project were approved out of the 39 projects covered in the plan.

However in the new request to the current lawmakers, President Buhari urged them to approve the loan which he said was “critical to the delivery of the government’s policies and programmes”.

The letter read: “While I have transmitted the 2016-2018 external borrowing plan to the eighth National Assembly in September 2016, this plan was not approved in its entirety by the legislature.

“Only the federal government’s emergency projects for the North East’s four states projects and one China…assistant railway modernisation projects for Lagos-Ibadan segment were approved out of the total of 39 projects.

“Outstanding projects in the plan that were not approved by the legislature are nevertheless, critical to the delivery of the government’s policies and programmes relating to power, mining, roads, agriculture, health, water and educational sectors.”

“Accordingly, I have attached for your kind consideration, relevant information from the Minister of Finance, the specific outstanding projects under the 2016-2018 external borrowing plan for which legislation approval is currently sought,” he said.

“I have also directed the minister to make herself available to provide any additional information or clarification which you may require to facilitate prompt approval of the outstanding projects under this plan.”