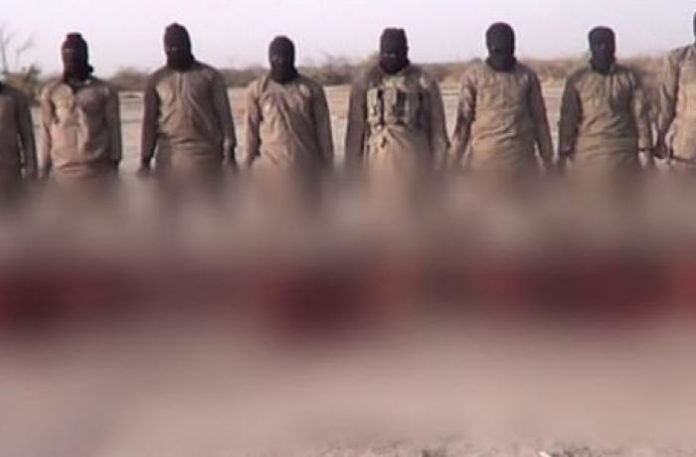 ISIS released a video Thursday that purportedly shows militants in black masks beheading 10 blindfolded Christian men and shooting an 11th in Nigeria, as part of a grisly campaign to avenge the deaths of its leader Abu Bakr al-Baghdadi and the group’s spokesman.

The militant group’s video was produced by its own so-called news agency, Amaq, and was released the day after Christmas.

The 56-second video has Arabic captions but does not have audio.

In the video, ISIS soldiers wearing beige uniforms and black masks are lined up behind the Christian men. One captive in the middle is shot while the other 10 are pushed to the ground and beheaded. Not a lot of details were given about the victims other than they were male, Christian and “captured in the past weeks” in Nigeria’s north-eastern Borno State.

In an earlier video seen by Reuters, the captaives pleaded for the Christian Association of Nigeria and President Muhammadu Buhari to intervene to save them.

In the new video purportedly from Nigeria, the militants claim the murders were carried out in revenge for the death of Abu Bakr al-Baghdadi (pictured).

In the new video purportedly from Nigeria, the militants claim the murders were carried out in revenge for the death of Abu Bakr al-Baghdadi (pictured). (AP/Al-Furgan media)

“We killed them as revenge for the killing of our leaders, including Abu Bakr al-Baghdadi and (ISIS spokesman) Abul-Hasan al-Muhaiir,'” said a member of the terror group’s media unit, according to journalist Ahmad Salkida, who was first sent the video shot in an unidentified outdoor area.

In October, Baghdadi killed himself during a U.S. raid on a compound in northwest Syria, seven months after the so-called ISIS “caliphate” officially crumbled as the terrorist group was defeated in its final swath of Syrian territory in March.

Raphael Gluck, the co-founder of Jihadoscope, which monitors online activity by Islamist extremists, told Fox News that that ISIS affiliates are rising across Africa – almost unchecked.

“We saw a terrible ambush of U.S. forces in Niger in 2017, that played into ISIS propaganda for months and really put Africa in focus, it has only grown in strength since,” he said.