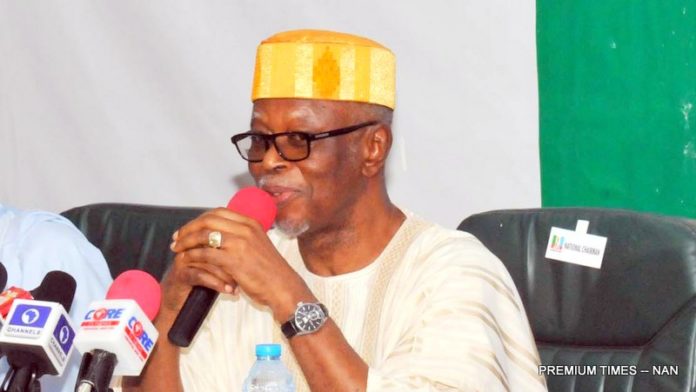 The immediate past national chairman of the ruling All Progressives Congress, APC, John Oyegun, on Thursday said the government has failed to address “what is making Nigerians increasingly unhappy and poorer”.

He said since the return to democracy in 1999, every successive government, including the present administration, has continued to incur the wrath of Nigerians instead of ameliorating their plight.

“We have never asked ourselves the question of why are our people getting increasingly unhappy with their governors within those 20 years,” Mr Oyegun, a former governor of Edo State said.

Speaking as guest at the 17th Edition of the Daily Trust Dialogue held in Abuja, Mr Oyegun, 80, feared that the situation is promoting diversity.

“What worries me is the threat to our democracy,” he said.

His assertion builds on that of Olusegun Obasanjo, a former president, who had said that Nigerians are unhappy “and want to leave the country.”

According to a report by Daily Trust last July, Mr Obasanjo, a known critic of the Buhari’s administration, said Nigeria might not move forward if the country continued to lose its identity to diversity.
Amotekun

The former APC national chairman said the government has failed “to ask why the voices of dissent have become louder”.

He cited the controversy trailing the decision of the federal government to declare Amotekun, a security outfit set up by South-west governments, illegal as a recent example.

“Amotekun is just one of them which shows a general feeling of enough is not being done in a certain area and this has been a growing syndrome in the last 20 years,” he said.

The position of the government, delivered by the Attorney General and Minister of Justice, Abubakar Malami sparked outrage among many Nigerians.

While critics argue that only the courts have the power to invalidate such a group, the Southern and Middle Belt Leaders Forum said the declaration was in furtherance of the widely – held suspicion that sections of the country were deliberately being rendered vulnerable for armed herdsmen and other criminals by the Federal Government.
‘Unanswered questions’

“Why are they getting poorer, why are they losing hope. Those are the questions I think pose a threat to our democracy because today we are beginning to hear rumblings that we didn’t hear before,” Mr Oyegun asked.

“What have we missed between the government and the people? What should we be doing as a government, as leaders that we are not doing? Why is it that our people are losing hope, losing faith in us, and hope in the nation?”

He also said there is something fundamentally wrong. “I cannot give you the answer but it is something that another dialogue probably needs to address.”

Mr Oyegun has increasingly become a critic of the APC led administration after he was replaced by the incumbent party chairman, Adams Oshiomhole, also a former Edo governor.

Ahead of the party chairmanship primaries that saw him out of office in 2018, Mr Oyegun, who holds a degree in economics said the country is running a “bastardised political structure”.

His cold war with the APC was also laid bare during his 80th birthday last August.