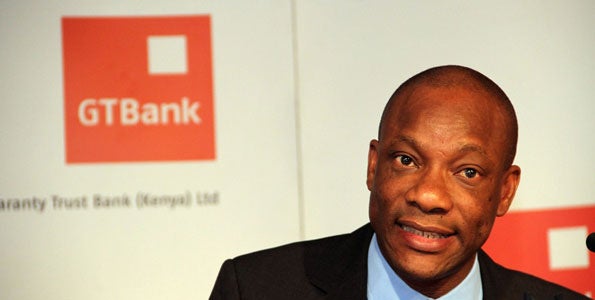 The meeting, which took place at the Oriental Hotel in Victoria Island, Lagos, had about twenty people in attendance. The tier-1 bank had decided to hold the AGM by proxy in a bid to avoid unnecessary physical contact among attendees, thereby limiting the spread of the coronavirus.

Chairman’s welcome address: As always, the meeting was chaired by Mrs Osaretin Demuren, GTBank’s Chairman of the board of directors.

In her welcome address, Demuren acknowledged all the shareholders who were present at rhe meeting, as well as those who were attending by proxy. She also acknowledged the presence of representatives from regulators such as the Securities and Exchange Commission, as well as the CBN.

She then introduced members of the company’s board of directors, many of whom attended the meeting by proxy.

The company’s Managing Director and Chief Executive Officer, Segun Agbaje, was present during the meeting. Him, along with Dumuren and the Company Secretary, E.E Obebeduo, were the only ones seated on the high table.

The Company Secretary then read out the matters that were up for deliberations, including the approval of the the audited financial statement for the year ended December 2019.

Focus on the Coronavirus: Before delving into the agenda of the meeting, the Chairman and the company’s CEO took sometime to talk about the Coronavirus pandemic. According to the Chairman, the pandemic has wrought negative health impacts. It is therefore, in compliance of the guidelines that were set by the government that the AGM was being held in proxy, she said. The AGM was streamed live.

In terms of what GTBank has done to assist the government in the fight against the Coronavirus pandemic, the CEO mentioned that the company has built and donated a 110-bed isolation centre in Lagos. The project was completed within four days.

A quorum was reached: Moving on, the Chairman noted that in compliance with the company’s article of association, that there was enough quorum present at the meeting to carry on the business of the day.

Apparently, GTBank’s article of association requires that at least 100 shareholders whose names appear in the registrar of shareholders must be present at the company’s AGM either physically or by proxy. As at the time the meeting commenced, there was a total of 496 shareholders, representing holders of 54.4% of the company’s entire issued share capital.
app

According to Uba, Pricewaterhouse Coopers believe that the GTBank’s audited financial statement for full-year 2019 give a true picture of the company’s financial performance during the period under review. The financial statement was compiled in accordance with regulatory requirements, she said.

In the course of the more-than-an-hour-long meeting, shareholders unanimously voted to pass three key resolutions.

One of these is the resolution to pay a final dividend of N2:80 per ordinary share of N0.50 to shareholders whose names appear on the register of members as at close of business of March 18th, 2020.

Some of the shareholders in attendance applauded GTBank’s board of directors’ decision to go ahead with the AGM by proxy at time when other companies have decided to cancel their own AGMs due to the pandemic.

According to them, the holding the AGM will make it possible for the bank to pay dividends to shareholders, someone if whom may need the money in order to survive the lockdown that has been declared on some parts of the country by the Presidency as part of effort to combat the virus.

You may watch the full proceedings of the GTBank 2020 AGM by clicking here.