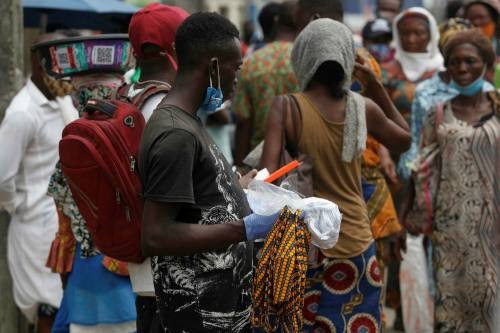 Scores of mysterious deaths in northern Nigeria have sparked speculation that coronavirus may be moving untracked through Africa’s most populous nation, which has reported few confirmed cases but conducted fewer tests than other countries with smaller populations.

Ten weeks after Nigeria reported sub-Saharan Africa’s first coronavirus cases, the country has recorded 4,400 infections out of a population of more than 200m. That is compared with about 4,300 cases in Ghana, where the population is only 30m, 10,000 cases in South Africa and 9,400 cases in Egypt.

Nigerian officials concede that the low count is due in part to limited testing. Nigeria has tested just 27,000 samples, compared with about 356,000 tests in South Africa, which has a population less than a third of the size.

The country’s response is led by a group of well-respected doctors, but has been hobbled by decades of under-investment in healthcare and a global supply chain for equipment, medicines and chemicals that appears to have largely shut out developing countries. Last month, Nigeria was so desperate for testing supplies that Dr Chikwe Ihekweazu, head of the country’s Centre for Disease Control, was forced to put out an urgent call for so-called RNA extraction kits on Twitter, including his email address at the bottom for any supplier who wanted to respond.

Health minister Osagie Ehanire has been candid about the healthcare system’s vulnerability and the need for people to follow government guidelines on mandatory mask-wearing and social distancing. But officials have also acknowledged that it may be difficult for the poorest Nigerians to comply and case counts are now rising by hundreds each day, just as economically challenging lockdowns are being eased.

Nigeria Covid-19 Cases
Last week, Lagos, Africa’s largest city, relaxed its restrictions, allowing the millions of inhabitants who live hand-to-mouth to go out to earn for the first time in five weeks, leading to scenes of crowded markets and banks flooded with customers withdrawing money.

On the other side of the country, patients at a government isolation centre in north-eastern Gombe state protested in the streets at what they said was mistreatment. In one of many videos circulating on social media, a healthy-looking patient referenced a conspiracy that the pandemic was an elite money-making scheme.

“They said we have coronavirus. Look at us?” she said in Hausa, according to a translation by Nigeria’s Vanguard newspaper. “Do we look sick? Do you see any sign of sickness in us? Look at us very well and see!”

Coronavirus in Africa
Idayat Hassan, director of the Abuja-based Centre for Democracy and Development, said such videos showed a “clear failure” by the government to build trust and explain asymptomatic transmission.

“Both the citizens and government seem not to understand the gravity of this invisible enemy,” she said. “The disbelief is of course linked to the history of public corruption, so corona to many [people] is just another oil boom for public officials to loot the treasuries.”

Mistrust had not been helped by the rumours of unexplained deaths in some states, Ms Hassan added.

Late last month in Kano state, the north’s commercial centre, gravediggers told local media they were burying far more bodies than usual, despite few officially confirmed cases of the virus and just as the government laboratory conducting Covid-19 tests in the state shut after staff tested positive. A government team led by a forensic pathologist is expected to release a report on the deaths soon.

Last week, an official from Jigawa state, east of Kano, told TV news that roughly 100 people had died of Covid-19-like symptoms in a single municipal area, only for state officials to contradict him days later. In neighbouring Yobe, state officials disputed local news reports that 155 people had died within six days of symptoms related to the disease.

In spite of the fears of under-reporting, Nigeria’s healthcare system has so far held up relatively well even though it is one of the least funded in the world on a per capita basis. Few patients have needed scarce ventilators and hospitals have not been overwhelmed, even as many Nigerians have complained of difficulties in getting tested.

The country’s private sector has stepped in to donate millions of dollars, tens of thousands of testing kits, hundreds of intensive care beds, medical equipment and a number of temporary isolation centres. That was a good start, but further collaboration would be needed to avert a crisis, said Dr Folabi Ogunlesi, managing partner at Vesta healthcare consultancy in Lagos.

Dr Ogunlesi, who practises respiratory medicine and has an advanced degree in molecular immunology, said he could not yet explain Nigeria’s comparatively low caseload but worried about the situation in Kano and other northern states.

“There will be a need, after the whole thing is over, to look at data and try to work out with some rigour how the pandemic transpired in Nigeria,” he said. “Having said that, gravity does occur in Nigeria, so I don’t think we should be complacent.”