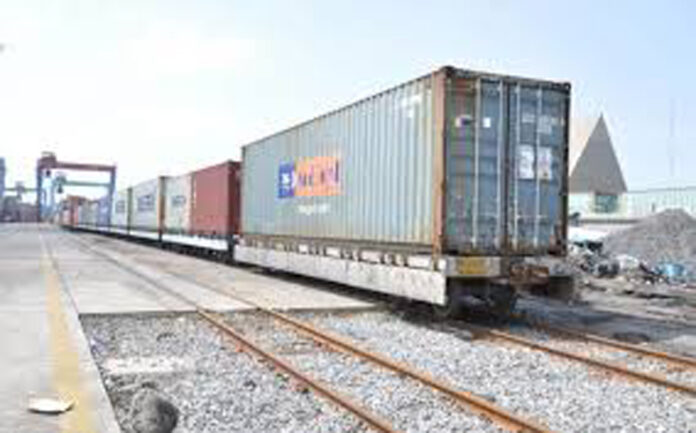 By Yemi Adeleye
Lagos, July 30, 2020 The Nigerian Railway Corporation (NRC) moved 20,760 tons of containers between June 30 and July 26, after the implementation of the Standard Operation Procedures (SOPs) for the Apapa container shuttle.
The Lagos Railway District Manager, Mr Jerry Oche, disclosed this in an interview with newsmen on Thursday.
Oche said that cargo transportation had become more efficient in and out of the port since the implementation of SOPs.
The NRC boss said: “We actually moved 20,760 tons between June 30 and July 26. For the import containers, we did nine rakes and moved 169 containers.
“For the empty containers returning to the port, we did 11 rakes and moved 209 empty containers. Meanwhile, we did eight rakes for the export containers thereby moving 141 containers into the ports.”
Oche said that the corporation had only operated for 19 days .
According to him, though the expected trips are 76, the corporation ran 28 trips.
He said that the SOP was between the NRC and the APM Terminals at Apapa with the Shippers’ Council as the supervisor.
Oche, who noted that the corporation had the intention to do two trains daily from the port, said that SOP had bridged the communication lapses that existed between the NRC and the APM Terminals.
The NRC boss who expressed the corporation’s commitment and determination to decongest the ports, said that the NRC would not leave any stone unturned to change the narratives at the port through the freight services.
He said that a train is made up of 19 wagons and each of the wagons can take one 40-foot or two 20-foot containers.
“If we are doing a 40-foot train , that is 19 trucks off the road and if it is a 20-foot train , that is 38 trucks off the road per trip. We are starting with two trips per day and we hope to increase it in no distant time.
“Containers will be discharged at Alagomeji Terminals in Yaba and Ijoko Terminals in Ogun State.
“Trucks can then be deployed in both locations to collect containers and return empties, which the NRC will convey back to the port,” he added.NAN reports that the NRC announced the suspension of the Lagos-Ogun Mass Transit Train Services (MTTS) on March 25, as part of efforts to contain the further spread of COVID-19 in the state and the country.
The Lagos-Ogun MTTS is yet to resume though the corporation resumed Abuja-Kaduna train services on Wednesday after four months of suspension to contain spread of COVID-19 pandemic. (