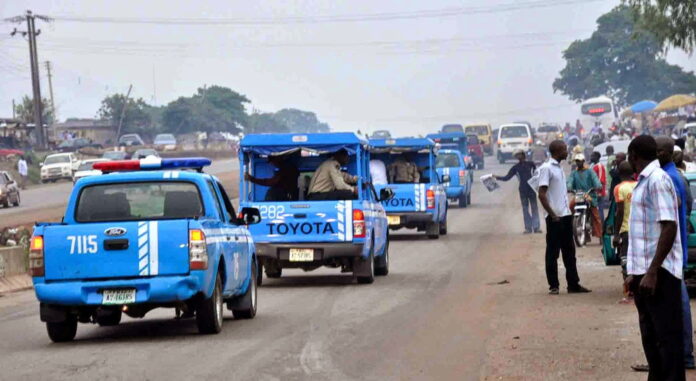 By Emmanuel Antswen
Makurdi, July 30, 2020 The Federal Road Safety Corps (FRSC) on Thursday said it had arrested five of its staff for extortion in Nasarawa State.
The Assistant Corps Marshal, Mr Kayode Olagunju, disclosed this during his maiden visit to the Benue State Command in Makurdi.
Olagunju is the Commanding Officer, Rs 4 Jos Zonal Headquarters, overseeing Nasarawa, Plateau and Benue States.
Olagunju also urged the corps marshals to live within their means and desist from acts capable of ending their careers untimely.
He said that within two weeks of his resumption of duty as the Zonal Commanding Officer, RS 4 Jos, he had arrested five marshals for extortion in Nasarawa State, one of the states under his Command.
The corps marshal also said that the command would not tolerate any form of attack on its staff, both on the road or in the office as such an act would attract serious sanction.
He disclosed that he had set up a monitoring team that monitors the activities of all marshals within the zone, especially, on the roads.
“We must improve on our level of public education and steps of enforcement.
“We must learn to be very civil in the cause of discharging our duties because there are instruments and laws to punish offenders.
“The Command will not tolerate any attack on her staff on the road or office as such an act will attract severe punishment.
“I have warned my men against extortion on several times.
“The issue of extortion is very serious and we have arrested five of our staff within the last two weeks in Nasarawa State for extortion.
“I will ensure that all those bad eggs who are not discplined are flushed out of the system because discipline is the key and our staff are well motivated,” he said.
Olagunju also disclosed that so far, two FRSC staff under the Plateau Command had tested positive for COVID-19 and urged all marshals to take the pandemic seriously.
The Zonal Commanding Officer said that the Corps must ensure that all motorists obey the COVID-19 safety measures by conveying only 60 percent passengers that the vehicle should have originally conveyed.
He also appealed to the public to abide by COVID-19 safety measures, adding that the pandemic is real.
He said the issue of overloading, speeding, obeying traffic rules, use of phones while driving amongst others remain a fundamental challenge to the Command.
Olagunju commended the Plateau Government for it’s decision to build a multi-million naira driving school for the Command.
He also appreciated the Benue Government for allocating land for the construction of a new complex for the State Command.
On his part, the State Sector Commander, Corps Commander Aliyu Baba, said that the Command had deployed 583 personnel for effective traffic control during the Eid el-Kabir celebration in Benue.

Baba said that all motorists must obey COVID-19 safety guidelines before plying the roads and urged travellers to ensure that they travel during the day.

“As part of the enforcement, the command will organise a mobile court where drivers who violate traffic rules and regulations as well as those who flout COVID-19 protocols will be arraigned,” he said.