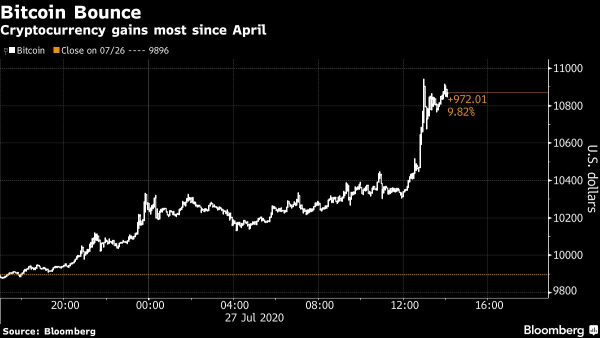 Bitcoin surged to the highest in almost a year as the slump in the dollar and rally in gold bolstered the notion that cryptocurrencies will emerge as a viable alternative to traditional monetary systems.

The largest digital token climbed as much as 15% to $10,944, the highest price since August. The rally accelerated after the coin breached $10,500, a level that it had failed to sustain gains after surpassing in June and February.

Bitcoin, which crypto fans have often touted as “digital gold,” is in favor as the yellow metal hits record levels, concerns rise about the health of the world economy and the dollar falls.

Advocates tout cryptocurrencies as a way to protect wealth from government action such as stimulus measures, which are often viewed in inflationary.

Also, last week, the U.S. Office of the Comptroller of the Currency said American banks can provide custody services for customers’ crypto assets, which could help boost the asset class’s appeal with some investors.

The cryptocurrency had been hovering near its 50-day moving average for weeks before pulling above it in the past couple of days.

Bitcoin has enjoyed above-average flows this year, and those flows are relatively high versus their five-year average when compared with those of exchange traded funds in other asset classes, according to a report from JPMorgan Chase & Co. strategist John Normand on Friday.