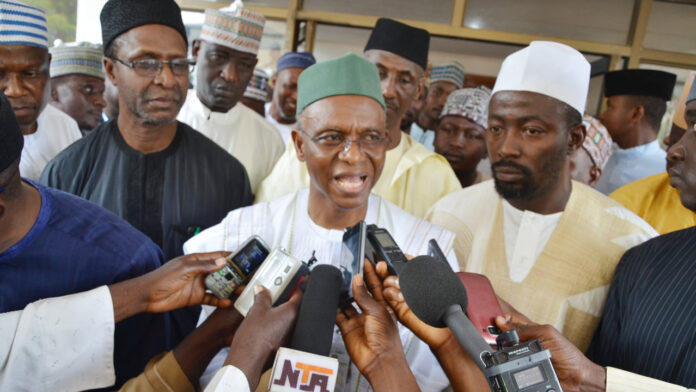 El-Rufai, who made the disclosure at a meeting with the Council of Emirs and Chiefs, on Tuesday in Kaduna, explained that the money was used to support security agencies and acquire technology and infrastructure to fight insecurity in the state.

The governor noted that the money would have gone into developmental projects if the people had chosen to live in peace.

He therefore, called on all the traditional rulers to help persuade people to choose to live peacefully, and address misleading narratives on current communal conflicts in part of the state.

He noted that, part of the misleading narrative on the current crisis in Southern Kaduna, was the false claims of genocide and land grabbing.

The governor emphasised that the claims had no basis whatsoever.

“As governor, I authorize any traditional ruler to please tell the media about any inch of land within their domain that has been forcibly grabbed or illegally occupied by anybody or group and I assure you that security agencies will be there the next day to flush them out.

“But as far as I know – and I receive security reports every morning, there is no such incidence that the State government is aware of.

“But we don’t know everything, you know more than us because you are closer to the communities, so please report where indigenous people have been displaced by bandits or anyone else”.

El-Rufai assured that goverment will continue to support security agencies to restore calm in the affected communities.

“To make this sustainable, we call on the traditional institution to collaborate with the security agencies to expose and report criminals in their communities.”

He assured the Council, that the government would review and upgrade the chieftancy system, to protect the traditional leaders from administrative and executive arbitrariness.

The governor added that a new law would be enacted to protect the traditional institution and ensure that, before any emirate or chiefdom is created, “it will pass through the State Assembly where the representative of the people will have the opportunity to vote and support it before it is done.”

“The reform will also seek to amend the traditional institution as an enabler of inclusion in the diverse communities.

“It will place the Chiefs and Emirs in charge of geographic areas not tribes or ethnic groups, making them the leaders of everyone that lives within their domain.

“It is our intention in this law, to specify the functions of traditional leaders and provide for situations under which traditional rulers can be deposed not just because the governor wants to depose the person he doesn’t like”.

On his part, the Chairman of the Council and Emir of Zazzau, Dr Shehu Idris appreciated the government for its support of traditional institution in the state.

He also commended government’s efforts in the fight against banditry and other forms of criminalities, especially in taming the recent killings in some areas in southern Kaduna.

The Emir said that the meeting was to update the traditional rulers on the security issues bedeviling the state as well as responses to the COVID-19 pandemic.