CAS tasks NAF cadets on core values of integrity, service before self 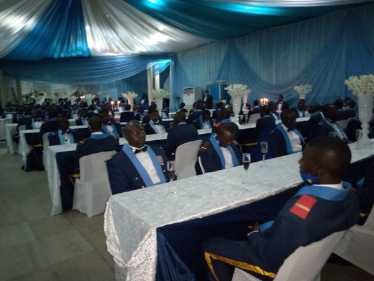 By Mohammed Tijjani
Kaduna, Aug. 5, 2020 The Chief of Air Staff, Air Marshal Sadiq Abubakar, has tasked cadets of the Nigerian Air Force (NAF) on core values of integrity, first excellence in all they do and service before self.

Abubakar gave the charge on Tuesday night during the regimental Dinner of Direct Short Service, Course 29, at the Military Training Centre NAF base Kaduna.

Naija247news reports that regimental dinner was a military tradition worldwide aimed at inculcating one of the rich mess etiquette in officers in order to maintain regimentation and comradeship among other military ethics and tradition.

The Air Chief was represented by Chief of Policy and Plan, NAF Headquarters, AVM Isiaka Amao.

Abubakar reminded the cadets of vision of the NAF as they looked forward to passing out and begin your service to our fatherland as commissioned officers.

“To reposition the NAF into highly professional and disciplined force through capacity building initiative for effective, efficient and timely employment of air power in responsive to Nigeria’s national security imperatives.

“In line with this vision, you have undergone six months of intensive military training to prepare you as officers for the rigours of service in the NAF,’’ CAS said.

According to him, this is particularly important as the country, in recent time, has witnessed a wide range of security challenges that have stretched the capacity of the armed forces and other security agencies.

Abubakar said the armed forces, particularly NAF, had been involved in operation aimed at finding lasting solution to some of these security challenges.

He added that NAF has also been involved in community out-reach programmes to demonstrate a human approach to finding lasting solution to some of the security challenges.

“As you pass out from training to become commissioned officers, most of you will be assigned various duties in order to restore peace to our nation.

“Such duties will not only require professional competences, but also your ability to lead men in the field.

“Military profession is all about leadership and command, as young officers, you will realise that your men depend on you for inspiration.

“You are, therefore, to ensure that you show good example in both your personal qualities and abilities.

“This can only be achieved by ability to apply NAF core values of integrity, first excellence in all we do and service before self,’’ he said.

Abubakar charged the cadets to always ensure that equipment and resources that would be put at their disposal were maintained and judiciously utilised.

This, he said, is in keeping with NAF policy of prudent management of resources and culture of self-reliance, which is key driver of CAS vision.

NAN report that the passing out parade of the cadets would be held on Aug. 8