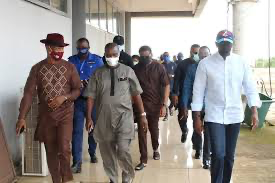 By Ifeanyi Olannye
Asaba, Aug. 6, 2020 The Delta Government said on Thursday that modalities were being worked out to ensure resumption of flight operations at the Asaba Airport soon.

The Secretary to the State Government (SSG), Mr Chiedu Ebie, made the disclosure while inspecting the airport, ahead of the planned resumption of operations.

Naija247news recalls that the state government shut down the airport on March 27, to stem the spread of Coronavirus (COVID-19) in the state.

Ebie said the airport was ready to resume operations, in line with the stipulated guidelines and COVID-19 protocols to contain the spread of the virus.

He said the state government had put measures in place to ensure assengers’ compliance with the Nigeria Centre for Disease Control (NCDC) COVID-19 guidelines for aviation activities.

The SSG said the inspection was to ascertain the level of preparations on the part of the management of the airport for the full resumption of flight operations.

He expressed satisfaction with the level of compliance with guidelines by the Nigeria Civil Aviation Authority (NCAA) and the NCDC against the spread of the virus.

Ebie disclosed that personnel of the airport were currently undergoing training to enable them to function optimally in line with the “new normal.”

He also said that when flight operations resumed, no fewer than six airlines, including Ibom Air, Azman and Arik Air, would be on the Asaba route.

He gave the assurance that the state government would ensure that physical distancing and wearing of face masks were maintained in the operation of the airport.

Ebie, however, noted that it was not the state government’s duty to regulate air fares, but it would ensure that the airport ranked among the best in the country.

“The state government has no right to regulate the fares as the airlines are in business, but government will continue to do its best to ensure that the airport remains one of the best in the country,” he said.

On his part, the Special Project Director of the airport, Mr Austin Ayemidejor, said steps had been taken to ensure physical distancing, compulsory wearing of face masks, washing of hands and temperature check at the point of entry.

Ayemidejor who conducted the SSG roud airport, said that it was ready to host full flight operations.

The team inspected the ticketing hall, departure and arrival halls as well as other sections of the airport.