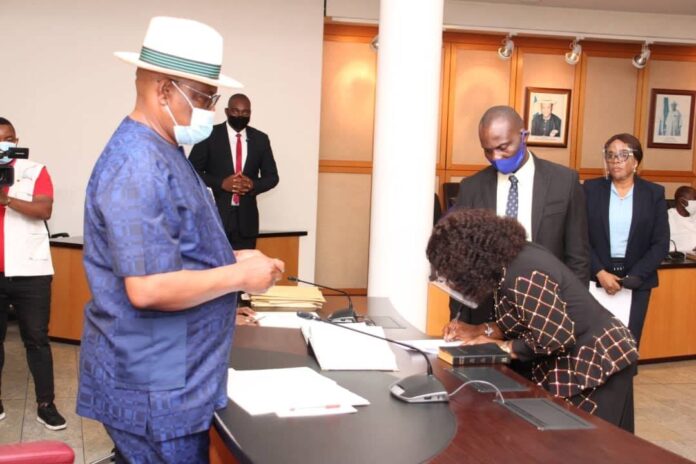 By Dianabasi Effiong
Port Harcourt, Aug. 5, 2020 Mrs Alaso Obi has been sworn in as the substantive Chairman of Asari-Toru Local Government Area of Rivers following the death of the former Chairman, Chief Odiari Princewill.

Obi, who was the vice chairman of the council, was sworn in on Wednesday by Gov. Nyesom Wike at the Government House, Port Harcourt.

Wike charged the new council boss to use her new position to make a difference for the people to feel the council’s impact.

He said: “Go and put your local government together. Do not allow busy body politicians to distract you. Use this opportunity you have to make a difference.

“We never thought that Chief Odiari Princewill will die but as God will have it, he is dead and we have to abide by the Constitution.

“That is why you, as the deputy, has to step in as the substantive chairman of Asari-Toru Local Government Area today.

“In choosing your Deputy, you must consult widely with all the stakeholders of the Party. As election is coming up next year, you have an opportunity to sell yourself.’’

Wike also used the occasion to direct the closure of the accounts of the Joint Account Allocation Committee from banks that allegedly gave unauthorised loans to some local government chairmen in the state.

He also directed the State Attorney-General and Commissioner for Justice to take legal action against the affected banks.

According to the governor, both the banks and local councils will “suffer the consequences of the illegality’’.

He noted that the banks should not seek refund of the loans because they contravened extant laws of the state.

“We have taken a decision that for all those loans taken without approval, the affected accounts must leave the defaulting banks.

“I have told the Attorney-General and Commissioner for Justice to take necessary steps.

“The Banks cannot go and seek for refund from the local governments. When you default the law, you suffer for it.

“Council Chairmen who want to take loans from banks must get official approval. You cannot take loans that will mortgage the future of the people,’’ Wike stated.