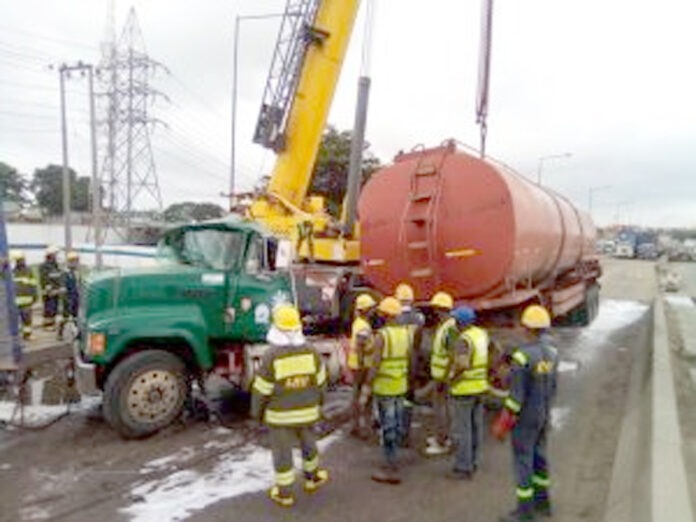 LASEMA’s Director-General, Dr Olufemi Oke-Osanyintolu, who confirmed the accident in Lagos, added that the body of the yet-to-be identified female victim had been deposited at the mortuary by SEHMU officials.

Oke-Osanyintolu noted that the body of the victim was removed from where it was pinned to the vehicle’s dashboard, emanating from the impact of the tanker’s head.

He stated that the accident occurred when a tanker with registration number KSF 260 XY ran into a pothole in front of the Nigerian Army Signal Barracks at Mile 2.

The LASEMA chief noted that the content of the vehicle started drizzling, immediately the tanker fell sideways.

“Further investigation revealed that the driver and his assistant immediately fled the scene.

“An unidentified female adult, who was seated beside the tanker driver was trapped in the impact and lost her life.

“The agency’s Response Unit, fire fighters from the Lagos State Fire Service and the Nigerian Army were on standby, to arrest any potential secondary incident,” Oke-Osanyintolu said.

He, however, said that the fallen tanker had been recovered and handed over to LASTMA officials at the Mazamaza Division.