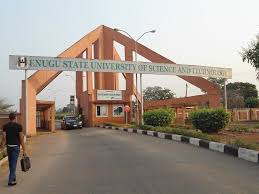 By Nicholas Obisike
Enugu, Aug. 11, 2020 Enugu State University of Science and Technology (ESUT), on Tuesday trained 21 newly-appointed Heads of Department (HODs), and Dean of faculties of the College of Medicine for good administration.
Prof. Uche Eze, Enugu State Commissioner for Education, who declared the retreat open in Enugu, urged the newly-appointed administrators to be up and doing.
Journalists, reports that 18 HODs and three Dean of Faculties participated in the retreat which was first of its kind in the institution.
Eze said that all hands must be on deck in taking the departments and faculties to higher level.
”In some universities, this position is highly contested because it’s a high and strategic position. I therefore, urge you not to personify it.
”You are appointed to the position for all and sundry; you need to incorporate others for smooth runing of the faculties, departments and institution at large.
”Since you are conversant with the rules and regulations of the university, I do not think you will fail in the assignment,” Eze said.
Prof. Charles Eze, ESUT Acting Vice Chancellor, said that the retreat became neccesary to ensure good administration.
The acting vice chancellor noted that the retreat was a noble one because before now, such training was done for only first year students.
”Leaning is a continues process. We find it proper to remind the newly-appointed administrators on what is expected of them and to teach those who may not know,” Eze said.
He said that such retreat would help the HODs and dean of faculties to add value to their positions.
”Going by the quality of the resource persons, I have no doubt that at the end the new administrators will come out better and well equipped to go about their duties,” Eze said.
Also, Prof. Frank Ezeugwu, Provost of the institution’s College of Medicine, said that the purpose of the retreat was to produce doctors of repute.
”The idea of bringing the administrators on board is for them to contribute to the uplift of the ESUT College of Medicine.
”It is also to make the institution greater than what we have seen now and it is our responsibility to produce medical doctors of repute in the associate programmes of the college.
”We have to do this so that they can effectively take over from us when we quit the institution,” the provost said.
Dr Chris Igbokwe, Registrar, University of Nigeria Nsukka (UNN), commended the provost of the College of Medicine for the initiative.
Igbokwe urged participants to be conversant with the law establishing the institution, its condition of service for staff members and the university channel of communication.
He said that the administrators must master the organisational structure and the ethics of the institution to drive their faculties and departments forward.