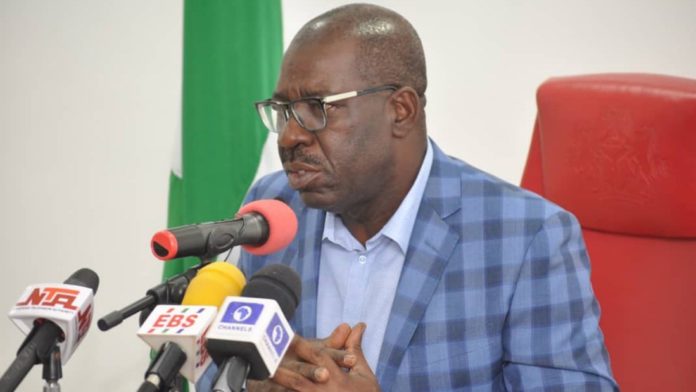 By Deborah Coker
Ogwa (Edo), Aug. 21, 2020 Gov. Godwin Obasekiof Edo and candidate of the Peoples Democratic Party (PDP) in the Sept. 19 governorship election has appealed to supporters of the party to re-elect the present administration for continuity of its people-oriented programmes

Obaseki made the appeal at Ogwa, ward 1, in Esan West Local Government Area, when the PDP Edo governorship campaign council held its rally.

He said:“To whom much is given, much is expected. I am aware of your request in this community which include more empowerment, and more appointments.

“I am ready to do my part. So vote for me I work for you. This election is important, help me to help you.”

Earlier, Chairman of the PDP state campaign council, Chief Dan Orbih, urged the party’s supporters to come out enmasse on Sept. 19 to re-elect the its candidate.

“This election is very important. On election day don’t say let me go to the farm first or any other place before going to your polling units to vote.

“Go straight to your polling units and vote for our governor, because this election is not about him, but about all of us,” Orbih said.