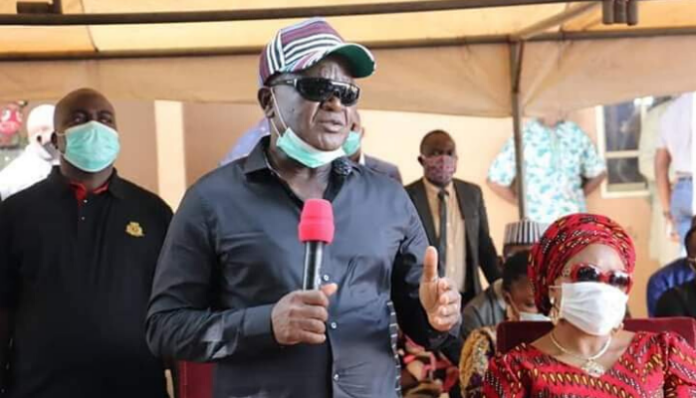 By Nicholas Dechi
Makurdi, Aug. 31, 2020 Gov. Samuel Ortom of Benue says the state government will continue to implement its policies and programmes in line with the bidding of the people who elected him in 2019 for second term.

Ortom stated this in Makurdi on Monday when retired Controller of Prisons Iorbee Ihagh, the President-General, Tiv socio-cultural group, Mzough-U-Tiv’s, led other executive members on a courtesy visit to government house.

“I will do only those things that please Benue people because they elected me.

“I wonder why some people outside Benue blame me for doing what my people want.
“My loyalty remains with my people. With the support they have given me, I owe them good governance,” he said.

The governor further advised Benue residents to engage in meaningful economic activities that will enhance their standard of living as “spending precious time in pastimes such as drinking of alcohol is not profitable.

“Drinking of alcohol will not profit anybody rather it will cause damage to the body.

“Benue residents do not have any reason to be idling away to the extent of drinking alcohol in the early hours of the day.

“We cannot continue like this. It is not the best way to go. We need to use our quality time to do things that will enhance our income.

“A lot of opportunities abound in Benue. Our arable land alone if judiciously put to use can turn things around for us,” the governor said.

He further assured the Tiv socio-cultural group that it should count on his support in worthy causes including defence of the Tiv nation.

Earlier, Ihagh said that Tiv people were predominantly farmers, stressing that their greatest challenge was activities of herdsmen displacing them from their ancestral homes.

He added that the people no longer concentrated on their farming activities.

He, however, commended the governor for signing the Anti-Open Grazing bill into law.

He said that the law had brought respite to farmers in most communities that were experiencing incessant attacks on them and their farms by herdsmen, describing the action of Ortom as “no mean feat.”
He pledged the organisation’s unflinching support to the present administration in the state.