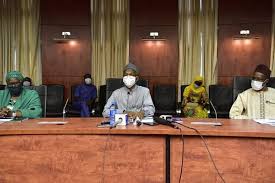 By Hussaina Yakubu
Kaduna, Sept. 3, 2020 The Justice Isa Aliyu led Commission of Inquiry into the crises in Kajuru, Kachia and Chikun Local Government Areas of Kaduna State has submitted its report to Gov. Nasir El-Rufai on Thursday.
This was contained in a statement signed by Muyiwa Adekeye, Special Adviser to the Governor on Media and Communication, issued to newsmen in Kaduna.
El-Rufai pledged that the government will promptly study the report and consider the recommendations.
The governor thanked members of the commission for their hard work and contributions to helping government to resolve the matter.
He explained that the state government set up the judicial commission of inquiry to determine all the facts around the violent conflict in order to build sustainable peace in the area.
Newsmen reports that the 10-member judicial commission of inquiry was constituted by the government in April 2019.
It was mandated to investigate, ascertain and identify the immediate and remote causes of all instances of disturbances from 2017 to date in Kajuru, Kachia, Chikun LGAs and surrounding communities.
“Identify individuals, traditional and religious institutions and other associations that might have contributed to the build-up of the disturbances and recommend further action by government.
“Assess, determine and establish the extent of loss of lives and property and other forms of damage caused during the disturbances and identify the perpetrators of the dastardly acts for further action by government.
“Make any other recommendations to government consequential to or related to any or all these terms of reference.
“In the light of the commission’s findings, recommend appropriate legal and other actions to be taken against those responsible for the disturbances.
“Make appropriate recommendations to government on steps to be taken to forestall future occurrence of the disturbances.”