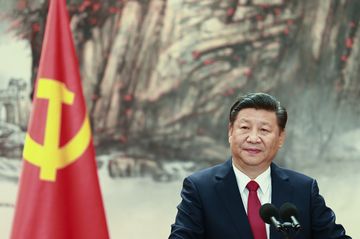 Rejecting U.S. effort to distinguish between party and people

Chinese President Xi Jinping said nothing will come between the Chinese people and the Communist Party that has governed them for more than 70 years, setting a combative tone at a difficult moment in U.S.-China relations.

Speaking at an event marking the anniversary of Japan’s formal surrender in the Second World War, Xi outlined areas where China will “never” accept foreign interference. He took aim in particular at threats to the Chinese Communist Party’s continued one-party rule.

“The Chinese people will never allow any individual or any force to separate the CCP and Chinese people, and to pitch them against each other,” Xi said.

“The Chinese people will never allow any individual or any force to distort the CCP’s history, and to vilify the CCP’s character and purpose.”

Xi didn’t specifically mention the U.S. in his remarks, which focused on rallying his nation.

But his comments are likely to be interpreted as a message about the relationship, setting the tone for state media and more junior officials in interactions with the U.S. on everything from trade to technology and the South China Sea.

The tone of the speech, acerbic by the standards of Chinese politics, highlights how seriously China’s leaders take the threat of external challenges to their rule. In recent months, Chinese diplomats have rebuked Secretary of State Michael Pompeo, who routinely refers to the CCP, and not China, as a nation in his scathing attacks.

The diplomats also have threatened “consequences” to countries ranging from Norway and the Czech Republic to the U.K. for perceived provocations.

Chinese leaders have stressed the Communist Party’s ability to stand up to foreign aggression since they won control after World War II. As Xi has sought to strengthen his grip at home and confront a more hostile U.S., he has frequently turned to similar nationalist themes.

— With assistance by Peter Martin, and Jing Li