COVID-19 transmittable through the toilet? 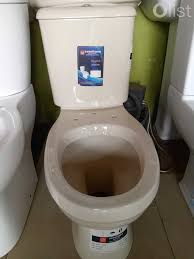 Coronaviruses wafting through a Chinese apartment building’s plumbing may have infected some residents, according to a new study, raising fears of yet another way that COVID-19 could spread. The case echoes a 2003 outbreak of severe acute respiratory syndrome (SARS) that spread through the pipes of a Hong Kong apartment building—and some worry that transmission via toilets might have contributed to the COVID-19 outbreak that shut down New York City early in the pandemic.

The study adds to months of warnings that SARS-CoV-2, which causes COVID-19 and is thought to spread mainly through respiratory droplets and aerosols, could also infect via feces. “It’s not something that people like to talk about,” buildings expert Joseph Allen of the Harvard T.H. Chan School of Public Health wrote in a Washington Post op-ed this week.

Although fecal transmission of a pathogen is tricky to confirm—and proving that a virus spreads via building waste pipes is even more difficult—it is entirely possible, several researchers tell ScienceInsider. With their help, we try to answer some key questions about this unusual and still speculative risk.

Can people catch COVID-19 from poop?

A number of studies have reported finding RNA from SARS-CoV-2 in fecal samples from COVID-19 patients. Some of those patients also had diarrhea, suggesting the virus had infected their intestinal tracts; the RNA could also come from swallowing saliva or respiratory tract fluids containing the virus. Such fecal samples inspired wastewater testing currently being used to watch for incipient COVID-19 outbreaks in cities around the world and at some U.S. universities.

Some studies have also found abundant coronavirus RNA in hospital bathrooms, and one modeling study suggested that flushing a toilet can spew viral particles far above the seat. A person could therefore be exposed to SARS-CoV-2 by breathing aerosolized fecal matter, or by ingesting the virus after touching a contaminated surface.

A key point often glossed over, scientists say, is the limited evidence that viral RNA in stool comes from live, infectious viruses—not just leftover material from “dead” or destroyed viruses. Only a few labs have reported culturing live virus from COVID-19 patient stool samples, which is challenging to do. One team has suggested that intestinal fluid neutralizes the virus. The U.S. Centers for Disease Control and Prevention says “it is unclear” whether virus in feces can cause COVID-19 and concludes the risk of spreading the virus this way is “low.” To date, there are no documented cases clearly indicating infection via fecal matter.

But  Allen and other researchers say the risk should not be ignored. Many animal coronaviruses can be spread through feces, “so it isn’t a stretch to believe it might be possible with SARS-CoV-2,” says epidemiologist Susan Amirian of Rice University.

But whether that risk is present in sewage is another question. By the time human waste reaches a typical sewer outfall or treatment plant, any potentially intact viruses are likely too diluted to be infectious, says environmental engineer Jordan Peccia of Yale University, who is testing wastewater for SARS-CoV-2 in Connecticut. To date, there is little to no evidence that COVID-19 spreads via sewage.

What about that 2003 SARS outbreak in Amoy Gardens?

Amoy Gardens, a Hong Kong housing complex with multiple apartment towers, saw 321 residents catch SARS in 2003; 42 of them died. Researchers traced the outbreak to a single visitor with SARS who had severe diarrhea. The bathrooms in the apartments had floor drains for cleaning, and when the U-shaped traps beneath these drains dried out, aerosolized SARS virus from the sick resident reached apartments through an air shaft. Typically, such wafting is blocked by water that has accumulated in the traps. Scientists suggested the wind even carried the aerosols to adjacent buildings.

How does Amoy Gardens compare with the new COVID-19 cases in the Chinese apartment building?

Just nine people got sick from SARS-CoV-2 in Guangzhou, where the apartment building was located, and none died. But there are similarities, says University of Hong Kong mechanical engineer Yuguo Li, who studied both cases. Li’s group—along with teams from the Guangdong Provincial Center for Disease Control and Prevention and Guangzhou CDC—describe their new findings this week in the Annals of Internal Medicine. (China CDC mentioned the cases in less detail in a paper published late last month, as first reported by Bloomberg.)

Here’s what is known about the COVID-19 episode: All five members of family living in a 15th floor apartment tested positive for SARS-CoV-2 in late January, after most of them had visited Wuhan, where the pandemic started. A few days later, two middle-aged couples living on the 25th and 27th floors—part of a stack of vertically arranged apartments directly above the flat in question and all sharing the same waste pipes—became ill. They had not traveled or been in close contact with a sick person during China’s lockdown.

Li’s team compiled a range of evidence suggesting the two couples were exposed to fecal aerosols from their neighbors more than 10 floors below through their shared waste pipes. Camera footage from elevators indicated that the families did not cross paths. Among more than 200 air and surface samples collected in the high-rise in mid-February, the only ones testing positive for SARS-CoV-2 came from the 15th-floor family’s apartment and a vacant apartment’s bathroom on the 16th floor directly above. Finally, a tracer gas that Li’s team piped into the 15th-floor apartment’s drainpipe exited in the 25th and 27th-floor apartment bathrooms.

The researchers could not verify that any of the three U-shaped traps in the apartments had dried out when the COVID-19 cases happened, however. The apartments had already been cleaned and the traps filled with water when they visited. Evidence for spread via plumbing remains “circumstantial,” they write. Still, Li’s team tells “a compelling story,” Peccia says.

Li says he’s aware of three similar cases of possible SARS-CoV-2 transmission via high-rise plumbing, two in Hong Kong, and another in Guangdong province. He’s investigating one of the Hong Kong cases, which involved five stacked apartments. “We really do not know” how many other cases there may be in China or elsewhere, he says.

Could COVID-19 have spread through the plumbing in New York City high-rises?

That depends on many factors and may be impossible to prove, researchers say. A sick person would have had to produce lots of infectious viruses, which would have had to reach others quickly, and at a high dose, Peccia says. “A lot has to fall in line.”

It would also depend on a building’s plumbing system and how well it was maintained. In the United States plumbing systems generally “protect people,” says Michael Gormley, a water sanitation expert at Heriot-Watt University in Edinburgh, who wrote a commentary on Li’s study. One difference in New York City is that most apartment bathrooms don’t have floor drains. But even so, there are other drains with U-shaped traps, like those in unused bathtubs, that could dry out.

“There’s no reason it couldn’t happen,” Peccia says. But if it does, he suspects “it’s a rare event.”

What’s the bottom line for apartment building dwellers, and people in general?

There are several steps people can take to reduce their exposure to such fecal aerosols, Gormley and others say. Chief among them is good hygiene—washing hands, cleaning the toilet, and keeping the lid down when flushing. If you live in a high-rise apartment building, make sure U-shaped traps are filled—that’s easily done by regularly running water in tubs and sinks. But gases can also leak from aging pipes, Li notes. “If [you] can smell the drain odor in your bathroom, do something.”

Share
Facebook
Twitter
Pinterest
WhatsApp
Previous articleAdamu Adamu, Nigeria’s education minister hospitalized in Germany, Sources say
Next articleMultiple Taxation Reigns in Lagos as Corrupt Local Government Officials Tax Shop Owners N100,000 To Fund For Council
Bisola Akinlabihttps://naija247news.com/
Akinlabi Bisola is a health and meds journalist with a deep background in Public Health Education and with a B.Sc in Health Education and Masters in Public Health Educator. You can catch up on her articles on her website thelbybisola.com
RELATED ARTICLES
General Interest