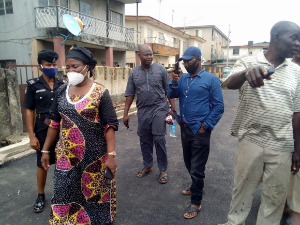 Lagos, Sept. 17, 2020 (NAN) The Federal Controller of Housing in Lagos State, Mrs Sarah Alawode, on Thursday said the Federal Government was committed to quality infrastructure delivery in its estates and all communities in the state.

Naija247news reports that Alawode said this during inspection of land, housing and road projects in Lagos..

She assured Lagos residents that reported infrastructure problems including roads, water, electricity, primary health care and schools were being handled by the Federal Government through the Federal Ministry of Housing.

“We cater for all the communities irrespective of whether they are federal government estates or not.

”Wherever members of the public reside, they are entitled to water, road, light, roads to alleviate thier suffering,” she said.

The controller said that the ministry had provided public water supply across all Local Governments in the state and had sunk 30 boreholes recently across councils.

While inspecting ongoing reconstruction of roads and drains in Nubi Close, Ebute Meta, she instructed the contractors on the project to expand the drains and construct speed bumps to improve safety of residents.

Residents of the area and Pastor Samuel Ilesanmi of the Christ Apostolic Church on Nubi Close in Ebute Meta expressed joy and thanked the federal government for the project.

“The road was terrible, but we thank God that Federal Government remembered us to construct this road,” Ilesanmi said.
The controller said that government was also constructing inner roads in various communities across Local Government Areas in the state.

She listed trunk B roads under rehabilitation to include Gemade Estate in Ipaja Ayobo and Isheri estates.

According to her, construction has just been completed in a community in Ijesha area of Surulere.

She said that some of the projects were federal government intervention projects or constituency projects attracted by lawmakers representating some of the councils.

Alawode said there was interference by a particular council which demolished fetching points of a borehole in their area, but the issue had been resolved.

“Almost all councils have benefited from the federal government solar or motorized borehole water project and we have done about 30 between 2019 and now,” she said.

The controller said that several school construction projects as well as transformer installation projects were ongoing in various councils.

She advised residents with infrastructure problems to make their request for intervention through lawmakers representing thier contituencies to the federal government.

While inspecting Adekunle Forshore project in Ebute Meta, the controller said the was to ensure there was no conflict among the stakeholders.

“There is this thing we call temporary occupation license; two or three people are using this place and we don’t want conflict between them, but from what we have seen there is enough space for all of them to operate freely,” she said.