COVID-19: How many patients return to hospital after discharge? 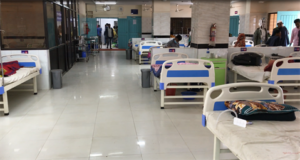 The COVID-19 pandemic is one of the greatest challenges that the global healthcare system has recently faced — the workforce has been spread thin, and many countries have reported shortages of beds in intensive care units, ventilators, and personal protective equipment.

Most people with confirmed or suspected COVID-19 who visit the emergency room are eventually discharged and sent home. This is to preserve the necessary resources for admitted patients and because people tend to prefer recovering at home if doing so is safe.

Emergency room staff make the difficult decision to send a person home only after determining which people have the greatest need for hospital care.

While people with severe illnesses receive swift attention, doctors and nurses usually encourage those with mild symptoms of COVID-19 to go home.

However, the unpredictable nature of the disease makes it difficult for emergency staff to tell which people need to be admitted to the hospital.

Early reports have revealed that many people with COVID-19 only develop severe symptoms several days after testing positive. A person may then develop breathlessness and pneumonia, blood clots, acute kidney injury, and inflammation of the heart muscle, an issue called myocarditis.

Overall, researchers and doctors are still in the dark about which people with COVID-19 will end up needing hospital care after being sent home from the emergency room.

In a new study published in the journal Academic Emergency Medicine, the researchers acknowledged these challenges.

They investigated how many people who had positive COVID-19 tests within 7 days, before or after, an emergency room visit returned to the emergency room and were then admitted for COVID-19 treatment.

The researchers used data from 1,419 people. They noted their age, gender, race or ethnicity, and whether they had hypertension, diabetes, or obesity.

They also took into account whether the people had an abnormal chest X-ray, a fever of over 100.4°F (38°C), or insufficient oxygen in their tissues, an issue called hypoxia, during their initial visit to the emergency room. The researchers defined hypoxia as a pulse oximetry level of less than 95% oxygen saturation.

The participants had each been discharged from one of five hospital emergency rooms in Pennsylvania or New Jersey from March 1 to May 28, 2020. The researchers made adjustments to account for the differences among the hospitals in their analysis.

After adjusting for the differences between the hospitals, the odds of those above the age of 60 being admitted were nearly five times greater than those aged 18–39. Before the adjustment, 27 out of 250 patients (10.8%) aged 60 or older were admitted, compared with just 13 out of 635 patients (2%) aged 18–39.

Another risk factor for a return admission was hypoxia — 109 patients (7.7% of the total) had low oxygen saturation levels on their first emergency room visit. Of these, 19 out of 109 (17%) had to be admitted within 72 hours.

This means that the adjusted odds of requiring hospitalization were nearly three times higher among people with hypoxia than those without it.

The odds of people with a fever being admitted were 2.4 times higher, compared with those without a fever. Other factors, such as an abnormal chest X-ray, also increased the likelihood of a return admission.

Comorbidities, such as obesity and hypertension, made the odds of a return admission 1.5 times more likely.

In their study paper, the researchers observe:

“Even with better evidence to guide disposition, it may not be feasible or effective to admit all patients with higher risk upon the first presentation. Importantly, return hospital admission does not equate to failure in inpatient care. Rather, this outcome represents the need for a higher level of care than can be provided at home.”

While this study provides emergency clinicians with more perspective about which admissions to prioritize, it also has several limitations.

The researchers only included patients who visited emergency rooms that are part of the local health information exchange (HIE) area. Some patients may have first visited one emergency room, then visited a second outside of the HIE area.

Also, emergency room staff treating participants in this study were not always aware that the people had COVID-19. In addition, the researchers cannot account for participants who may have died at home. Nor could they account for people with COVID-19 who received false-negative tests.