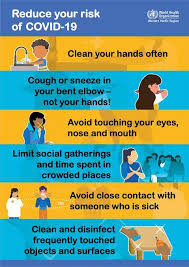 Since the beginning of the pandemic, several precautionary measures have been prescribed by global and national health bodies. Consistent handwashing, social and physical distancing, and the use of face mask were the innovations introduced to the world which most people were neither used to nor prepared for hence, lots of effort was put into ensuring there is a maintenance of these measures to reduce to spread of COVID-19.

Preventing entry without a face mask, providing handwashing facilities and the use of security forces were some of the strategies used to ensure the health behaviour innovations were practised to some extent even if not accepted by most people. Despite these strategies, there are still reported cases of noncompliance with some even becoming violent when being called to act by the set measures.

The Diffusion of Innovation Theory proposed by EM. Rogers is the health communication theory adopted to ensure the precautionary measures for COVID-19 are accepted. This theory explained there are five categories of adopters when a new health behaviour is introduced which are;
Innovators: this set of people from the name are the first to start a new health behaviour not because there is a prize for doing so rather, it’s because they are adventurous and fascinated about new ideas. They require little to no conviction before they practice new health behaviours, just tell them what to do and they are good to go.

Early adopters: this group is usually opinion leaders, they are aware of the need to be of a good example to their followers and, they always accept the opportunity to do that. They do not need much information to convince them, just teach them how to do it and if possible provide a manual on how to carry out the expected health behaviour. They try their best to convince their followers with the information provided and also ensure there are consequences for non-compliance. Examples of people in this category are; Traditional leaders, NURTW leaders, and Artisan Organisation leaders.

Early majority adopters: this category is rarely leaders however, they do adopt new ideas earlier than the average person. All they require to convince them into adopting new health behaviours is evidence that such an idea is effective, which could be research findings or success stories.

Late majority adopters: these people are always sceptical about change, and will only adopt an innovation if it has been tried by several people. Most times, they only adopt the behaviour to appeal to people or to avoid being punished for not acting. To appeal to this category, just let them know a lot of people are doing it which could be done by providing statistics of people that have adopted the behaviour since they like to follow trends, they will oblige.

Laggards: these people are said to be bound by tradition and very conservative, they see new ideas or changes as a threat and are the hardest to convince. Studies have revealed fear tactics is the best method to convince these set of people, these could be in form of punishment, use of security forces, or other measures that will leave them with no other choice. Examples of people in this category are the conspiracy theorist and those that become violent when being told to take precautions.

Now, we know why some individuals are quicker to adopt new health behaviours than others. It doesn’t mean they are not serious about their wellbeing rather, it has more to do with their personality types and ability to accept changes. The most important thing is to create the most suitable strategy that will propel them towards performing innovative health behaviour.

Which type of adopter are you?