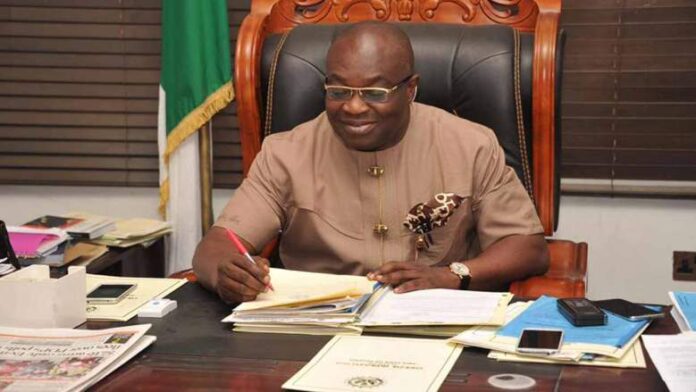 Speaking during the event at the Executive Chambers of the Government House, Umuahia, Ikpeazu charged the new appointees to see their appointments as a call to duty and service to God and humanity.

Chief Eze Chikamnayo, a two-time Commissioner for Information in the state and an aide to Ikpeazu, was sworn in as the TC Chairman of Umunneochi LGA.

The governor charged Nwanoruo to deploy modern technology in the management of traffic on major roads in the state to ensure free flow of traffic at all times.

He charged him to liaise with the parastatals under the ministry to achieve result.

He also urged him to evolve a new transport policy that would promote sanity in the transportation sector in Abia.

Ikpeazu expressed displeasure over the proliferation of illegal motor parks in the state and directed that the illegal ones be proscribed.

He also directed the commissioner to designate special routes for tricycle operators in the capital city Umuahia.

He said that the measure would help to facilitate the realisation of government’s traffic management programme.

He described as unacceptable, a situation where broken down vehicles were allowed to remain on the road for more than two days before they were towed, thereby causing traffic jam.

Ikpeazu mandated the commissioner for environment to consolidate the existing template in the ministry and work toward the full realisation of all NEWMAP Projects on flood management.

He said that the state government had fully paid its counterpart fund and fulfilled all conditions of the World Bank for the project.

He also urged the ministry to initiate measures to tackle flooding in Abia, identified as one of the states that might suffer heavy flooding this year.

The governor also directed the commissioner to embark on massive desilting of drainages and the introduction of erosion control strategies in schools’ curriculum.

He charged the TC chairman to explore areas where the council had comparative advantage to boost its economic growth.
Ikpeazu urged him to work closely with stakeholders and youths of the area to ensure rapid socio-economic development.

In their separate responses, the officers thanked the governor for finding them fit to serve and promised to contribute meaningfully to the development of the state.

The ceremony was attended by Dep. Gov. Ude Oko-Chukwu, former Senate President Adolphus Wabara, and the Secretary to the State Government, Mr Chris Ezem, along with other top government functionaries.