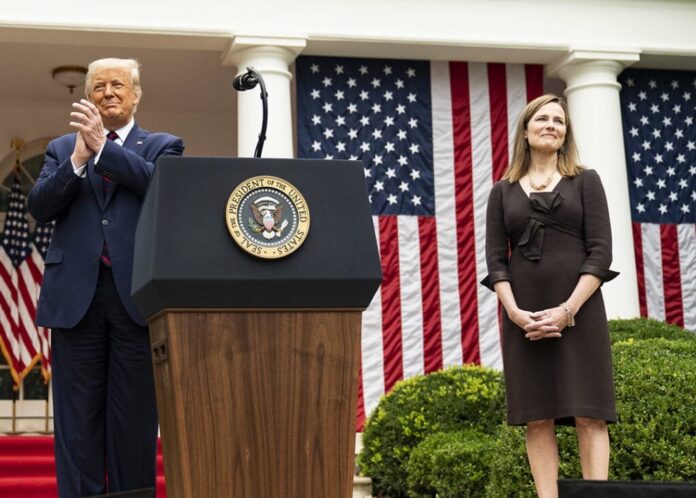 By Harrison Arubu
New York, Oct. 27, 2020 Amy Barrett has taken the judicial oath of office to replace the late Justice Ruth Ginsburg on the bench of the U.S. Supreme Court.

Chief Justice John Roberts administered the oath to Barrett, a conservative, in a private ceremony at the Supreme Court on Tuesday.

Barrett, 48, had earlier taken the constitutional oath at the White House on Monday night shortly after her confirmation by the Senate.

Supreme Court justices are required to take the constitutional and judicial oaths before assumption of duty.

Barret’s lifetime appointment has sealed a 6-3 conservative majority on the nine-member bench of the apex court.

Her nomination by President Donald Trump on Sept. 26, weeks before the Nov. 3, presidential election drew sharp criticisms from Democrats, who voted against her confirmation in the Senate.

The opposition believes her presence in the court will favour Republicans in politically sensitive cases, including healthcare and election disputes that may get to the apex court.

Joe Biden, former Vice President and Democratic Party’s candidate, decried the “rushed and unprecedented confirmation” of Barrett “in the middle of an ongoing election”.

“Just a few days after Election Day next week, the Supreme Court will hear the case on the Affordable Care Act.

“While panicked and erratic in mishandling the pandemic, Donald Trump has been crystal clear on one thing.

“He wants to tear down the Affordable Care Act in its entirety and take away your health care and protections for pre-existing conditions.

“But we will not give up. If you want to protect your health care, if you want your voice to be heard in Washington, if you want to say no, this abuse of power doesn’t represent you — then turn out and vote,” Biden said in a statement.

However, Barrett said in her speech after she took the first oath of office on Monday night that her policy preferences would not influence her decisions on cases.

She said the confirmation process had made one of the fundamental differences between the federal judiciary and the Senate clearer to her.

Barrett said it would be a dereliction of duty for her to put policy goals aside. By contrast, it is the job of a judge to resist her policy preferences.

“It would be a dereliction of duty for her (me) to give into them. Federal judges don’t stand for election.

“Thus, they have no basis for claiming that their preferences reflect those of the people.

“This separation of duty from political preference is what makes the judiciary distinct among the three branches of government,” she said.