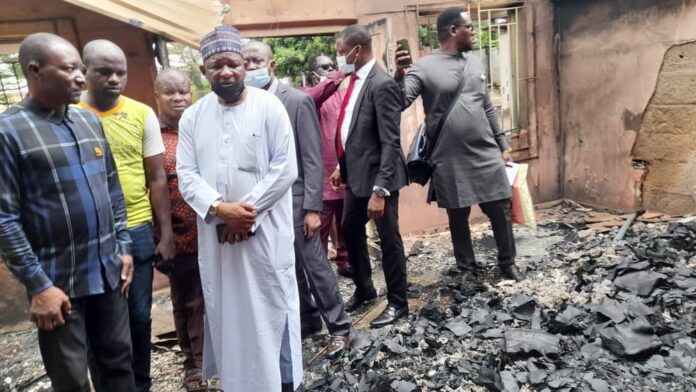 By George Odok
Calabar, Oct. 27, 2020 The Minister of State for Power, Prince Goddy Jeddy-Agba, on Tuesday inspected some buildings and properties vandalised by hoodlums who hijacked the Endsars protest on Oct. 24 in Calabar.

The Minister visited the West African Examination Council office, which was burnt down including thousands of certificates that were yet to be collected.

He also inspected the Cross River Basin Development Authority office, the Nigeria Television Authority and the Federal Neoru-Psychiatric Hospital that was vandalised also.

Speaking, Jeddy-Agba expressed shocked at the level of destruction of the buildings, cars and equipments, saying that the act was not normal.

According to him, the destruction has kept staff of the affected establishment out from their offices, describing the situation as worrisome.

While addressing staff of the Cross River Basin Development Authority, Jeddy-Agba urged them to be united and forge ahead.

“This place has been vandalised totally; nothing is left anymore. I sympathise with you and I want to assure you that I will relate this to the Federal Government,” he said.

Earlier, while addressing youths of Ekorinim community, the Minister informed them that the government have heard their requests.

He said that the Federal Government had outlined various empowerment and productive schemes for the youths with a view to engage them meaningfully.

“This time, the President will deal with the youths directly. The important things is for us to be together and united. All the things that have been destroyed needs huge money to be repaired and this is not goof enough.

“I urge you to always channel your complaints appropriately without causing violence,” he said

The Minister also visited the Rev. Fr. incharge of St. Charles L’wanga parish, Fr. Malachi Ephraim, to seeks collaboration with a view to foster peace in the state.