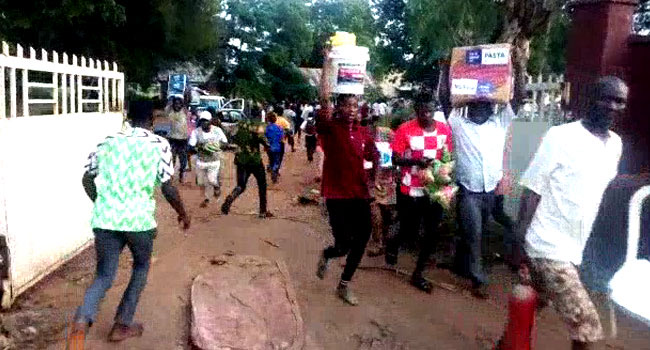 Osogbo, Oct. 27, 2020 The Police Command in Osun, on Tuesday, said it had arrested 87 suspects for allegedly looting public and private property during the mayhem that attended the EndSARS protests in some parts of the state.

While parading the suspects at the command’s headquarters in Osogbo, the state Police Commissioner, Undie Adie, represented by the Deputy Commissioner of Police in charge of CID, Adebola Hamzat, said that some of the looted items had been recovered from them.

“The resurgence of #EndSARS protests on Oct. 4 in Lagos had spread to all the 36 states of the federation and the
FCT.

“It is of common knowledge that the erstwhile peaceful #EndSARS protests by the Nigerian youth over the excesses of the Special Anti-Robbery Squad (SARS) had snowballed into brigandage, murder, assault and arson as well as destruction and looting of public and private property.

“Osun has had her own fair share of these incidents, as attacks were carried out on public officials and innocent private individuals, destruction of government and private property and massive looting.

“A total of 87 suspects were arrested and the looted items are being recovered, while investigations on their culpability are ongoing,” he said.

According to the police commissioner, as soon as investigations are concluded, the suspects will be arraigned in court.

He, however, called on the hoodlums, who participated in the massive looting, to take advantage of the amnesty granted by Gov. Gboyega Oyetola and return the looted items in their possession, saying that the 72-hour ultimatum given to them would elapse on Oct. 28.

Adie said that after expiration of the ultimatum, anyone found with the looted items would be arrested and charged with armed robbery, conspiracy, brigandage, murder, house- breaking, stealing, receiving stolen property and other sundry offences.