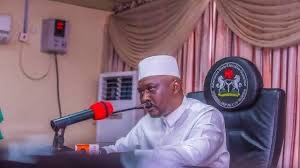 Yola, Nov. 2, 2030 The Adamawa Government has relaxed the 12- hour curfew imposed on the state in the wake of #ENDSARS protest, which was hijacked by hoodlums.

This is contained in a statement by Mr Humwashi Wonosikou, Press Secretary to Gov. Ahmadu Fintiri on Monday in Yola.
Wonosikou said that the curfew will now hold from 10 p.m. to 6 a.m., daily.

He quoted Fintiri as saying that the action followed gradual return of peace in the state.

”The Adamawa government has reviewed the 12- hour curfew imposed on the state following events of the aftermath of the #ENDSARS protest.

” The curfew earlier imposed from 6p.m to 8a.m has now been relaxed with immediate effect.

” People are allowed to move around and go about their normal businesses from 6a.m to 10p.m.,” he said.

He lauded residents of the state who complied with the directive to return looted items to government.

“We as a people are resolute to move this state forward.

” As we put this events behind us, I assure you that I will not relent, but ensure that all we have set to achieve are achieved,” Fintiri said.