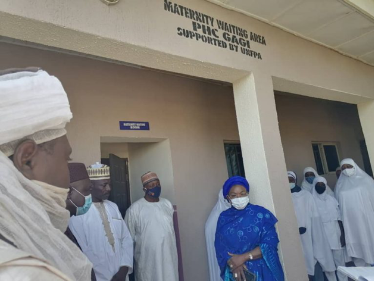 He made the commendation in an interview with journalists on Monday in Sokoto.

Umar-Jabbi said that the newly constructed waiting room would reduce the sufferings of pregnant women during labour, as most of them travelled long distances to the PHC.

He noted that the Gagi PHC was patronised by about 40 communities in three neighbouring local government areas in the state “and most times, pregnant women faced accommodation challenge while awaiting delivery and could not go back to their homes due to long distance.”

According to him, the neighbouring local government areas are Raba, Dange-Shuni and Kware, besides Sokoto South Local Government Area, while other residents also troop to the PHC on daily bases to access services.

The district head said “many pregnant women seek accommodation in houses near the Gagi PHC to wait for delivery, as they find it difficult to go back to their homes in distant communities and start going to the centre again.

“The women prefer to stay around the PHC when due for delivery to avoid complications.

“The well furnished labour waiting room would, therefore, help pregnant women from distant places to stay near the PHC until delivery.

“This would also strengthen complete healthcare system and reduce maternal and infant mortality.”

The monarch noted that pregnant women in labour with suspected complications, and those from poor family background and distant places would be prioritised at the established waiting room.

Umar-Jabbi, who holds the traditional title of Sarkin Yakin Gagi in the Sultanate Council, said that the labour waiting room came at the right time and urged donor agencies and governments to consider emulating the UNFPA initiative because of its relevance.

“The UNFPA labour waiting room has touched the lives of many women, while the PHC’s labour room was upgraded, furnished and well equipped for the women’s comfort.

“Before the UNFPA intervention in Gagi PHC, we recorded between one to four child deliveries in a month, however, with the improved services supported by UNFPA, the figure has increased to between 80 and 90 child deliveries per month.

“The intervention has increased access to overall family health, as community members are educated on importance of healthcare services through UNFPA support.”

He explained that measures to maintain the facilities were put in place from PHC management and community groups because community ownership of projects was incorporated in all the programmes.

He added that Gov. Aminu Tambuwal of Sokoto State had been striving harder in health sector across the state and people were mobilised to access improved services which changed the citizens’ lives in the state.

Umar-Jabbi appealed for the construction of more wards, nurses stations, more doctors room and routine equipment to strengthen healthcare in the PHC.

Some of the women contacted, Jummai Musa and Maryam Abubakar, described the newly established labour waiting room as a life saver to pregnant women.

They lamented the hardships faced by pregnant women during false labour when they came for delivery at the facility.

They expressed optimism that the labour waiting room would strengthen maternal health and prevent maternal and infant mortality, which occurred at times due to non-availability of accommodation for pregnant women to reside within healthcare facility.