Herdsmen Believe They Own Nigeria Because Buhari Is Fulani – Falae 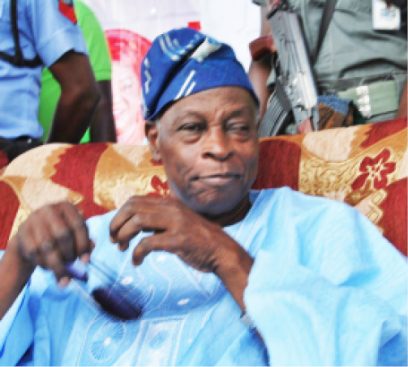 former Secretary to the Government of the Federation, Chief Olu Falae, has condemned the constant attacks on farmers in the Southern part of the country by marauding herdsmen.

According to Falae, an average herdsman ignorantly believes he owns everything in Nigeria because President Muhammadu Buhari is a Fulani.

And if they can no longer provide for these people, it is for you to take part of the money you are receiving from Abuja on their behalf every month to create grazing reserves and water for your people.

“But you’re now conspiring with them, coming down to other people’s domain, causing problems for other people and I also suspect that some political manipulations are going on. When I was a child, herdsmen were our friends, they would bring their cows here and we would sing with them after selling their cows, they were not threatening anybody.

“But in the last ten years or 15 years, they became violent and they have become a different thing altogether and I suspect it’s because the President is a Fulani. The ordinary herdsman ignorantly believes that they own everything in Nigeria, both all of us in Nigeria and whatever we possess.

“For example, a few years ago, one of the herdsmen hanging around my farm, met one of my workers and asked my workers why I was disturbing them, that I should be planting my maize on one side and allow them to graze on the other side, even on my farm. He was proposing that I should share my farm with him. Has such a person got any sense of property, right? Did he think he has no right in that place?

“So this is a new development for herdsmen to think they own what you have and that you must share what you have with them. As I have said, there are natural factors responsible for pushing them down south but the state government of where they come from always has a responsibility to look after them.

“When they saw that the Almajiri was not a good thing they decided to end it and decided to carry Almajiri from one place to another,” Vanguard quoted the former SGF as saying.

“The way the EndSARS protest was organised, I was impressed, it was matured, peaceful and patriotic. The security people saw that it was developing a lot of interests by behaving responsibly and to destroy and give them a bad name. They organised people and shot at them, why did they shoot at them?

Share
Facebook
Twitter
Pinterest
WhatsApp
Linkedin
Previous articleOil pulls back amid Covid restrictions, but still posts sixth straight week of gains
Next articleSanwo-Olu refuses to hand over to deputy Femi Hamzat despite been treated for COVID-19 at home
- Advertisement -