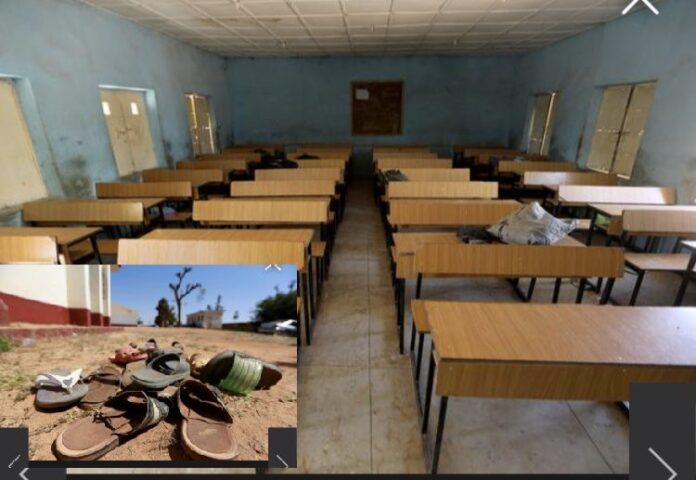 WASHINGTON – The United States on Tuesday condemned “in the strongest terms” the abduction of more than 300 schoolboys from their school in northwestern Nigeria and was investigating Boko Haram’s claim of responsibility, a spokesperson for the State Department said.

A man identifying himself as the leader of Nigeria’s Boko Haram, whose name means “Western education is forbidden” in the local Hausa language, said the Islamist group was behind the kidnapping which occurred on Friday at a secondary school in Nigeria’s state of Katsina.

A man identifying himself as the leader of Nigeria’s Boko Haram said on Tuesday the Islamist group was behind the abduction of more than 300 schoolboys, as anxious parents begged the government to secure their release.

Pupils who escaped kidnap on Friday, by jumping over the fence of the Government Science secondary school in Katsina state in northwestern Nigeria and fleeing through a forest, said the attackers were armed with AK-47 assault rifles and rounded up their victims before marching them off.

Boko Haram, whose name means “Western education is forbidden” in the local Hausa language, has waged an insurgency in the northeast of Nigeria since 2009 but has not previously claimed attacks in the northwest.

The claims in the audio tape, if true, could mark a widening influence of jihadist groups operating in northeastern Nigeria, political analysts said.

They could also signal that jihadists have formed alliances with militant groups operating in the Sahel, which could further destabilise the impoverished north of Africa’s most populous nation which plays a pivotal role in regional stability.

Katsina state authorities said about 320 boys were missing and Nigeria’s government said it had spoken to the kidnappers, who have sought a ransom from at least one parent.

“We’re begging the government to please try their best to get their release,” Hajiya Ummi, whose 15-year-old son Mujtaba is among those missing, said by telephone from her home in Bakori town in Katsina.

“His friends told me he was sick in bed when the bandits struck. He could hardly move but they dragged him out with the rest of the abducted students,” she said, her voice cracking with emotion.

Katsina officials had ordered all of its state schools to close because they did not know the attackers’ motives. Neighbouring Zamfara state on Monday also ordered its government boarding schools to close, according to a circular seen by Reuters.

AUDIO CLIP
In an audio message which reached Reuters via a WhatsApp message, a man purporting to be Boko Haram leader Abubakar Shekau said: “We are behind what happened in Katsina.”

“What happened in Katsina was done to promote Islam and discourage un-Islamic practices as Western education is not the type of education permitted by Allah and his holy prophet,” he said.

No video footage was released of the missing boys.

The man offered no proof for his statement. Reuters was unable to verify the audio and Nigerian authorities did not immediately comment.

Spokesmen for the presidency, police and army did not immediately respond to requests for comment.

Regional security experts said Boko Haram may not have been involved in the abduction itself, but that the kidnappers could have sold the boys to the Islamist group.

“There is a danger that jihadists operating in the Sahel could potentially build alliances with groups that have previously remained in northeast Nigeria. That would further destabilise the region,” Nwanze said.

A Monday attack in the southern Diffa region of Niger, which borders Nigeria to the north, left 28 people dead and 800 homes burned. The Diffa governor blamed the assault on Boko Haram.

Boko Haram carried out the 2014 kidnap of more than 200 girls from a school in the northeastern town of Chibok. About half the girls have been found or freed, dozens have been paraded in propaganda videos, and some are believed to be dead.

More than 30,000 people have been killed since Boko Haram began its insurgency, aimed at creating an Islamic state.