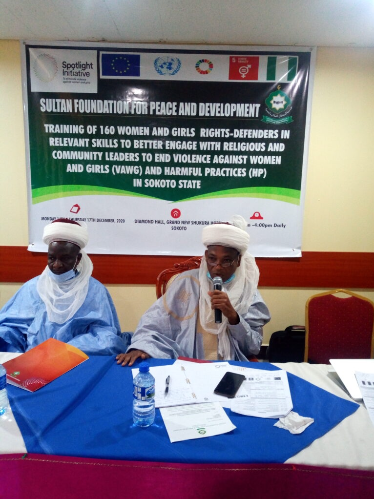 By Habibu Harisu
Sokoto, Dec. 16, 2020 Sultan Foundation for Peace and Development, an NGO, has commenced the training of 160 community defenders against Gender Based Violence (GBV) and Harmful Practices (HP) in Sokoto state.

The four-day programme was tagged ” Workshop to train 160 Women and Girls Right-Defenders in Relevant Skills to Better Engage with Religious and Community Leaders to End Violence Against Women and Girls and Harmful Practices”.

The Spotlight Initiative Project is the sponsor of the programme supported by the European Union, the United Nations, in partnership with the Federal Government of Nigeria aimed at eliminating violence against women and girls.

Speaking on Wednesday, the Foundation’s Programme Officer, Alhaji Musa Galadanci, said the training was to identify and discuss the high prevalence of violence against women and girls, as well as strategise on the promotion of gender equitable norms and response to cases in the society.

Galadanci said the participants were also expected to share experiences of handling, supporting and advocacy for victims of Sexual and Gender Based Violence (SGBV) as well as train women defenders to better engage community and religious leaders at all levels.

Dr Jabbi Kilgori, the Sa’in Kilgori, who was the Chairman of the occasion, welcomed the participants and resource persons and urged them to rub minds in order to have a good understanding of the issues, for the benefit of the society.

Kilgori noted that all the cases of GBV occurred in communities where survivors often faced untold hardships.

Wide-ranging topics were lined up for the training, including; Identifying and Addressing Gender Based Violence and Harmful Practices in the Community; Religious, Medical and Practical Perspectives; GBV and HP in the community.

Others were: Ensuring Access to Justice for Victims, Communications and Advocacy Strategies for Engagement Toward Prevention, Education, Intervention and Action on Ending Violence Against Women and Girls (VAWG) and Harmful Practices (HP).

The Permanent Secretary, Ministry for Women and Children Affairs, Sokoto State, Hajia A’isha Dantsoho, said the EU-UN
Spotlight Initiative Project was supporting the programme to unravel the many untold sexual and gender-based abuses.

” Establishment of the NANA Khadija Referral Center has facilitated receiving victims of all forms of violence against girls, women and even boys. More synergy between stakeholders are, however, needed to expose and handle these issues in our society ” Dantsoho said.

A Sokoto-based Islamic Scholar, Dr Aminu Sufi, called for moral training to instill the fear of Allah in all their dealings, as a panacea to changing peoples to be upright.

A Legal Practitioner, Mrs Rasheeda Muhammad, lamented some of the activities of Shari’ah Court Judges, Prosecutors and others in handling cases of sexual and gender based violence (SBGV), which require more concerted efforts.

Muhammad noted that the violence against women cases were increasing in alarming rates and urged stakeholders to redouble efforts at addressing the problems so as to achieve the desired impact.

” Access to justice is a serious challenge, because survivors need more care and complementary punishment to offenders, which was grossly inadequate.” Muhammad said.

NAN reports that the trainees were drawn from community-based organizations, religious groups, associations, traditional institutions and others.