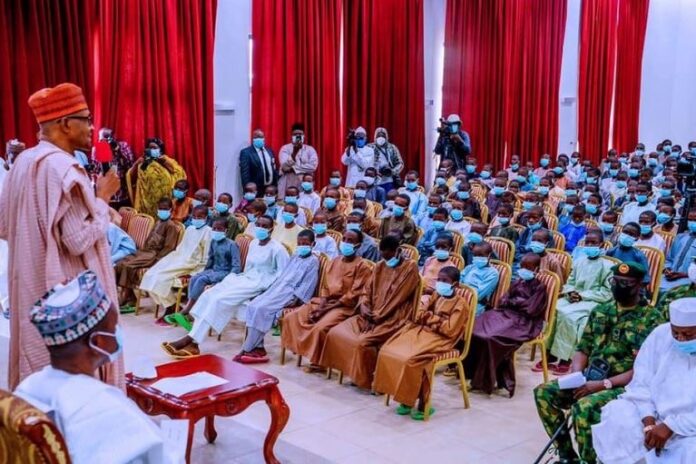 Abuja, Dec. 19, 2020 – The Federal Government has described as senseless the claim in certain quarters that the abduction of some students from a boarding school in Kankara, Katsina State, and their release was stage-managed.

The Minister of Information and Culture, Alhaji Lai Mohammed, dismissed the claim on Saturday when he featured on a special edition of the Nigeria Television Authority programme, “Good Morning Nigeria’’

The special edition of the usual weekday programme dedicated to the rescue of the 344 school boys abducted from their school on Dec. 11 in Kankara was monitored by journalists in Abuja.

When the government secured the release of 104 of the schoolgirls and two other children in March 21, 2018, certain groups, including the opposition Peoples Democratic Party, had also alleged that it was stage-managed to score cheap political point.

Reacting to the claim, the minister said it does not make sense for any administration to stage-manage abduction of students or any of its citizens.

“What precisely does government want to achieve? Is it to prove the deficiency of the military or what.

“In the case of Dapchi, we had all kinds of bizarre theories.

“You have to be in government to know how many sleepless nights the president, ministers and head of security outfits spent until the matter is resolved,’’ he said.

Mohammed said many people were disappointed that the Kankara abduction was resolved so fast just like that of Dapchi.

He said: “Many naysayers would have loved the incident to linger and become the igniting rod for their attacks

“Otherwise, how do we describe the spurious organisation like the Bring Back Our Boys that emerged within a few days of the capture of the students.

“Within a few days of the abduction, the so called organisation had moved to Katsina.

“When you have a situation like this, naysayers who are bent at bringing down the government, will come up with all kinds of theories that do not make sense.

“Dapchi abduction was in 2018, how come two years down the lane, nobody has come out to tell us how it was stage-managed?”

The minister admonished politicians and other interest groups to stop politicising and commercialising issues of security and national tragedy.

“In times of crisis and tragedy people normally come together to address the issue.

“It is not a time to politicise and even trade or commercialise the misery and tragedy of a nation.

“We can have our differences but when it comes to issues of security, we should come together and fight it,’’ he said.

Mohammed noted that it was disappointing that days after the Kankara boys were abducted, some political groups had come to Abuja distributing vests and placing banners all over the streets.

He stressed that times of national crisis such as kidnapping of children should not be used to denigrate the military, adding that people should rather come together to proffer solutions.