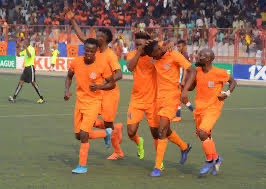 The match played at the Ondo State Sports Complex in Akure produced a lone goal scored by midfielder Omojesu Ogunniyi in the ninth minute for a 1-0 win.

Naija247news reports that both teams however failed to convert several goalscoring chances in the match.

Sunshine Stars’ Head Coach, Gbenga Ogunbote, who said he was optimistic his team would get better as the league progressed, nonetheless called for patience from fans and club supporters.

Ogunbote said the most important thing was that his team got the three points at stake.

“The team is a team in the making. I am very sure we will become a team to beat in no distant time. Winning will ease pressure on the team and the management,” he said.

The coach however canvassed for more support and understanding from the home fans, adding “we will make adjustment where it’s necessary.”

Speaking also, Ogunniyi who was named the Man of the match said scoring the match’s lone goal made him happy.

On his part, the Head Coach of FC IfeanyiUbah, Uche Okagbue, said he was not happy his team failed to convert the goalscoring chances they had.

Okagbue, who however played down the loss, assured that his team would win the reverse fixture during the season’s second round.

Naija247news reports that with the result, Sunshine Stars now have three points from two matches.