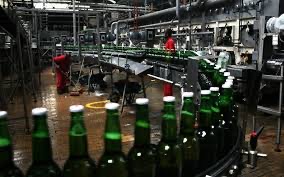 Heineken through its wholly owned subsidiary Raysun Nigeria acquired an additional 1.9 billion shares in Champion Breweries at N2.6 per share earlier in January and the market frenzy that ensued since the initial announcement is yet to seize, driving the stock to become the best performer on the Nigerian Stock Exchange (NSE) in the month of January.

Champion Breweries opened the year around N0.86 per share but closed the month of January trading around N3.1 per share, posting a market gain of around 262 percent in just one month.

Raysun had acquired the N1.9 billion additional shares to increase its stake in the company to 84.7 percent with an estimated deal value of around N4.95 billion. The market rally that followed this acquisition announcement has helped the company generate far more capital gains in the market than it has invested so far.

However, as at market close, the total stake of Raysun Nigeria in Champion Breweries is now worth an estimated N20.6 billion, an incredible return on investment of about 194 percent. This gain is largely driven by the significant premium of 202 percent the company paid to acquire the additional 1.9 billion shares in Champion Breweries.

Analysts are bemused at the size of premium offered for the acquisition of a company who have seen their business fundamentals weaken significantly in the company during the past year.

In the last quarter of 2020, the company had reported that its net profit fell around 79 percent year on year during the first 9 months of 2020.

Champion Breweries 9 months performance showed that net earnings dipped from N284.4 million in 9M 20219 to N59.67 million in 9M 2020 as cost of sales and selling and distribution expenses rose sharply during the year while revenue remained flat at around N4.8 billion in both periods.

The company has however, come a long way since it was initially acquired by Raysun in 2013. In 2013, company revenue was around N2.2 billion and net losses were reported to be N1.17 billion pushing accumulated loss to N8.89 billion.

However, by 2019, business performance had significantly improved with the company posting a revenue of N6.9 billion, net profit of N168.5 million and an accumulated loss of just N103.6 million (the company wrote off about N8.5 billion in accumulated losses using funds in its share premium account in 2018).

Investors who have participated in driving the stock price higher may be in for a rude reawakening when the full year 2020 performance shows how poor 2020 was for the brewery sector as a whole, which may trigger a reversal in some of the market gains enjoyed so far this year.