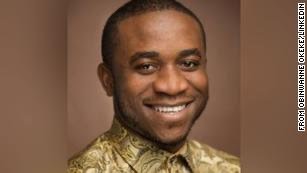 (CNN) Celebrated Nigerian entrepreneur Obinwanne Okeke has been jailed for 10 years by a US federal court for masterminding an $11 million cyber fraud on a British company.

The court heard that “through subterfuge and impersonation, Obinwanne Okeke, engaged in a multi-year global business email and computer hacking scheme that caused a staggering $11 million in losses to his victims,” Raj Parekh, Acting US Attorney for the Eastern District of Virginia, said in a statement Tuesday after the sentencing.

British company Unatrac Holding Limited — the export sales office for industrial machinery company Caterpillar — were the victims of an online heist perpetrated by Okeke and his team, who had obtained their login details through phishing emails, the justice department said.

“In April 2018, a Unatrac executive fell prey to a phishing email that allowed conspirators to capture login credentials,” according to the statement.

“The conspirators sent fraudulent wire transfer requests and attached fake invoices. Okeke participated in the effort to victimize Unatrac through fraudulent wire transfers totaling nearly $11 million, which was transferred overseas,” the statement added.
Okeke, who was hailed as a promising entrepreneur and appeared on the Forbes magazine ’30 under 30 list,’ had earlier pleaded guilty to the charge in June 2020, after he was arrested during a visit to the US.

Okeke, who operated a chain of companies under parent firm Invictus Group — based in Nigeria, was found to have committed a series of wire frauds between 2015 to 2019 along with others.

“The conspirators obtained and compiled the credentials of hundreds of victims, including victims in the Eastern District of Virginia,” the US justice department said.

“The FBI will not allow cyber criminals free reign in the digital world to prey on U.S. companies,” Brian Dugan, the FBI’s Special Agent in Charge of Norfolk Field Office said after the sentencing.

Okeke was arrested by the FBI at Dulles International Airport in Virginia, in August 2019, just before he got on a flight to Nigeria during a visit to the US.

In June 2016, Okeke who was 28 at the time, was recognized by Forbes among Africa’s Most Promising Entrepreneurs under 30 and was praised for his strides in construction, agriculture, oil and gas, telecoms and real estate.

The Forbes article stated that he was the 17th child in a polygamous home of four wives, and was born into an impoverished background.

According to Forbes, Okeke named his company Invictus “after one of Nelson Mandela’s favorite a poems, by William Ernest Henley, about the undefeated and unconquerable soul of a hard worker, from an impoverished background, who will not give up.”