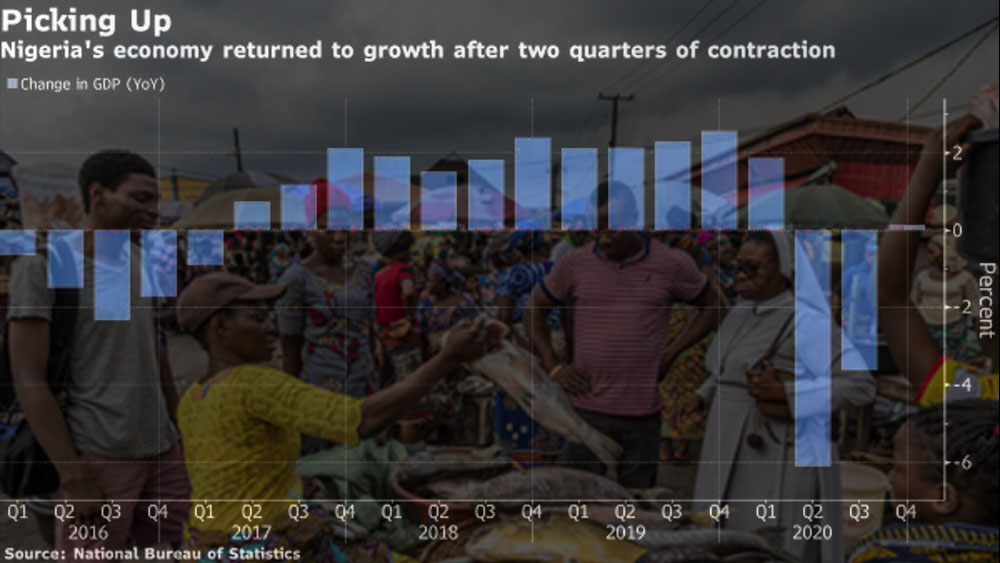 Nigeria’s economy unexpectedly came out of a recession in the fourth quarter as growth in agriculture and telecommunications offset a sharp drop in oil production.

Gross domestic product grew 0.11% in the three months through December from a year earlier, compared with a decline of 3.6% in the third quarter, the Abuja-based National Bureau of Statistics said on its website on Thursday.

The median estimate of five economists in a Bloomberg survey was for a quarterly decline of 1.86%. The economy contracted 1.92% for the full year, the most since at least 1991, according to International Monetary Fund data.

The surprise rebound means Africa’s largest economy may recover faster than expected as the oil price and output increase this year. It could also point to the growing importance of the non-crude sector.

While crude contributes less than 10% to the country’s GDP, it accounts for nearly all foreign-exchange earnings and half of government revenue in the continent’s biggest producer of the commodity.

The non-oil economy expanded by 1.7% from a year earlier, the strongest rate in four quarters, with agriculture growing 3.4% and telecommunications increasing 17.6%.

A stronger recovery could ease pressure on the central bank to stoke activity, paving the way for a renewed focus on its price stability mandate.

That means the monetary policy committee could start raising interest rates again to fight inflation that’s been above the target band of 6% to 9% for more than five years. The panel eased by 200 basis points in 2020.

The government’s forecast for growth of 3% this year is double that of the IMF. The lender has warned a slow roll-out of Covid-19 vaccines could threaten the economy’s recovery.

“The fact that we have seen a recovery in non-oil GDP growth is positive,” said Razia Khan, chief economist for Africa and the Middle East at Standard Chartered Bank. “However, the headwinds associated with the second wave of Covid-19 may still be considerable.”