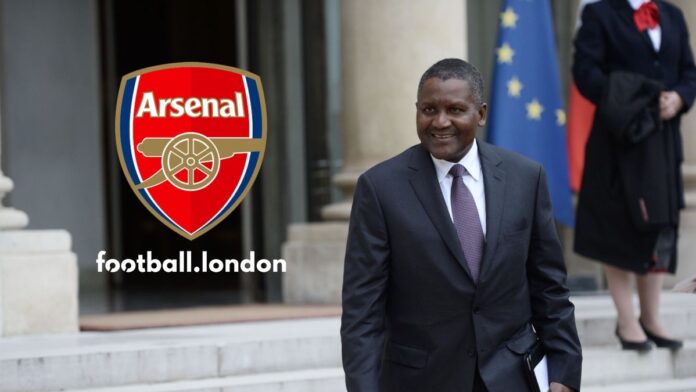 Arsenal fans do not hold the ownership of Stan Kroenke in high regard and could have been handed encouragement for their takeover dreams.

Nigerian billionaire Aliko Dangote, Africa’s richest man, has previously spoken in length about his desire to purchase the Gunners in the future.

In January 2020, Dangote stated that he could look to launch a takeover bid when the construction of his refinery in Lagos was completed.

That project is due to finish in ‘early 2021’, which suggests that a push for a change in ownership at Arsenal could be on the horizon.

[Fans have flocked to this news to express their hopes for a transfer, with Kroenke’s relationship with supporters soured due to a lack of investment and public appearances.

In 2018, Kroenke enforced a legal right to purchase all shares in the club after buying out Alisher Usmanov, which saw many proud fans stripped of the shares that they owned in their club.

That is just one of many issues fans have with the Kroenke’s and they’re keen for Dangote, should he takeover, to bring more success than his predecessor.

The Gunners are in the midst of a third consecutive season without Champions League football and, barring success in the Europa League this season, are set for a fourth next term.

Arsenal have also not won the Premier League title since 2004, the year they went unbeaten, and their only appearance in the Champions League final came in 2006.

Hallgrimsson steps down as Iceland coach