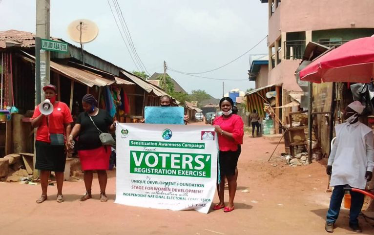 By Lucy Osuizigbo-Okechukwu
Awka, March 3, 2021 Some women development groups have partnered the Independent National Electoral Commission (INEC) to empower residents on voter’s education and electoral process ahead of the Nov. 6 governorship election in Anambra.

The groups, the STAGE for Women Development and Unique Development Foundation, during an awareness programme on Wednesday in Awka said that the participation of residents in electoral processes would strengthen democracy.

Mrs Eucharia Adukwulu, the South East Coordinator of STAGE for Women Development, said that voter education was vital to the success of any election.

She said that in addition to reducing voter apathy, that voter education programmes help in awakening the civic consciousness of the people to actively engage in political activities such as voting.

“As we prepare for the governorship election in November 2021, voter education and awareness is a vital step because when we vote, we are ultimately deciding the future for ourselves, our state and those around us.

“Politics essentially run our state and country and as eligible voters, it is important that people take advantage of their right to vote and make a decision that will benefit us in the long run.
“
As a people, we need to understand that with our votes, we can vote in credible leaders with proven integrity, intellectual power and passion for development of our state.

“We will be taking this voter education campaign to major markets, churches and town hall meetings in the three senatorial zones in the state, with a view to providing information aimed at improving credibility and transparency of the election.’’

Adukwulu also encouraged every eligible voter to go and register and collect their Permanent Voters Card which would position them to vote when the time comes.

She, however, urged other civil societies, religious and traditional institutions as well as the National Orientation Agency to collaborate with the electoral body.

According to her, educating potential voters is not INEC’s responsibility alone.