February Inflation Rises to 17.33% amid Pressure on Food, Non-Food Prices 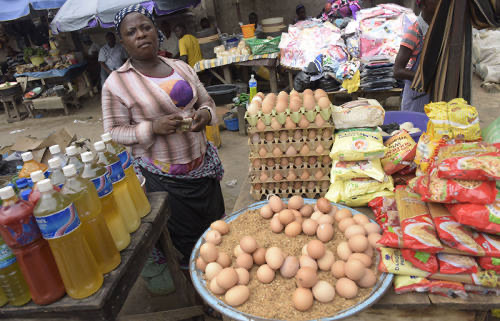 February Inflation Rises to 17.33% amid Pressure on Food, Non-Food Prices
Recently released data from the National Bureau of Statistics showed that headline inflation sustained its upward trajectory, rising to 17.33% in February 2021 (highest level since April 2017). This was higher than 16.47% printed in January 2021.

The increase in inflation rate was caused by broad- based increase from the food and non-food categories, albeit food prices continued to exert greater pressure. Exchange rate pressure, increase in energy prices which leads to higher logistics cost, insecurity in the food producing part of the country and a weaker harvest season continued to be the major drivers of inflation.

Food inflation advanced to 21.79% (higher than 20.57% printed in January) driven by rise in prices of bread, cereals, potatoes, yams and other tubers, meat, fruits among others.

On the other hand, Core inflation climbed to 12.38% (from 11.85% in January) driven by rise in passenger transport, medical services, hospital services and pharmaceutical products amongst others. Urban and rural annual inflation rates rose higher to 17.92% and 16.77% respectively.

We expect general price level to further increase in the next few months amid existing food supply challenges.

In addition to supply shrinkage due to the ongoing planting season, the major causes of food inflation include insecurity resulting from farmer-herder clashes in the North and armed banditry and increased cost of logistics.

The trend is expected to be sustained as global demand for fuel is projected to rise with increasing economic and trade activities as lockdown eases further.

Share
Facebook
Twitter
Pinterest
WhatsApp
Previous articleGlobal Healthcare Platform Ask The Doctor to Use Cardano for World’s First Utility Healthcare Token in Africa
Next articleWTO concerned about Nigeria’s foreign exchange management – Okonjo-Iweala
Godwin Okaforhttps://naija247news.com
Godwin Okafor is a Financial Journalist, Internet Social Entrepreneur and Founder of Naija247news Media Limited. He has over 16 years experience in financial journalism. His experience cuts across traditional and digital media. He started his journalism career at Business Day, Nigeria and founded Naija247news Media in 2010. Godwin holds a Bachelors degree in Industrial Relations and Personnel Management from the Lagos State University, Ojo, Lagos. He is an alumni of Lagos Business School and a Fellow of the University of Pennsylvania (Wharton Seminar for Business Journalists). Over the years, he has won a number of journalism awards. Godwin is the chairman of Emmerich Resources Limited, the publisher of Naija247news.
RELATED ARTICLES
General Interest