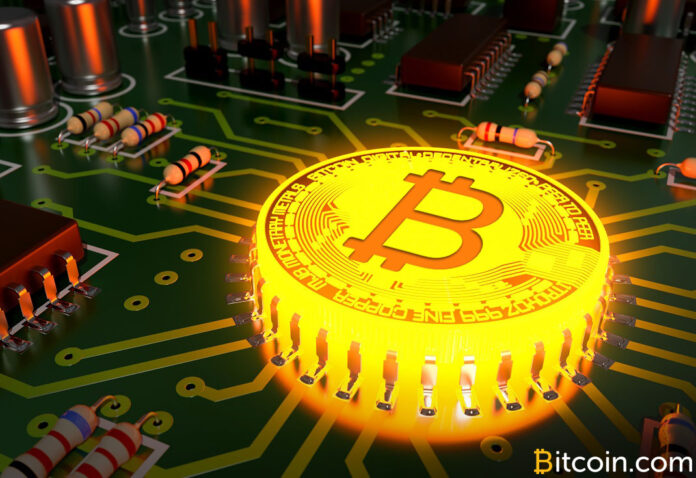 All commodities markets have their levered investment bets. Crude oil has wildcat exploration and production companies; gold and precious metals have the mining operations out doing the dirty work in the ground. A commodity of the future, bitcoin, is no exception to the rule that when there’s a scarce resource to exploit in the world, and investors are placing increasing value on it, miners will rush in to stake their claim to the riches.

Recent gains in what may be the most high-risk bitcoin bet of all led Leeor Shimron, vice president of digital asset strategy at Fundstrat Global Advisors, to take a look at the “digital gold rush” in trading of bitcoin miners.

These mining companies are fairly new and young, they lack track records, and some came to market in “roundabout ways” — and some of the biggest, like Riot Blockchain, attracted regulatory scrutiny in their early days. They also have been operating at losses, but Shimon noted they have reached over $1 billion in market cap after investing heavily during the bitcoin downturn in the hardware and facilities that helped them to “strike it big” in the current bitcoin bull market cycle.

Shimron described the miners in a note last week to clients who expressed interest in the surging stocks as a “high beta play” on bitcoin. During the recent bull run for the cryptocurrency, during which bitcoin is up 900%, the average return among the biggest publicly traded miners was 5,000%, according to his analysis.

Bitcoin miners, in Shimron’s words, form the core backbone of bitcoin’s blockchain, as they “burn electricity to computer-generate guesses aiming to solve cryptographic puzzles” and generate revenue in the form of mined bitcoin. As the bitcoin is mined, the miners sell the assets to cover their expenses. Many choose to also hold a portion of their mined bitcoin on their corporate balance sheet, a trend which is starting to gain traction with the more digitally-oriented, disruptive CEO class in the broader market, such as Jack Dorsey at Square and Elon Musk at Tesla. Musk just added “Technoking” to his executive title and the Tesla CFO recently had “Master of Coin” added to his. The North American mining company, Marathon Digital Holdings, recently announced it had purchased an additional $150 million worth of bitcoin to hold on its balance sheet.

Shimron’s analysis shows that the beta these bitcoin mining companies exhibit generates a return of 2.5% for every 1% move in the cryptocurrency. While there is not enough historical data to draw firm conclusions, the miners’ performance is clearly tied to the price of bitcoin, and their trading profile amplifies the upside and downside, he said.

It is a “notoriously competitive industry,” in Shimron’s words, where the ability to be profitable can come down to cheap electricity and access to specialized mining hardware. As bitcoin’s price increases, “miners spin up new rigs or upgrade their hardware with more powerful and efficient machines.”

Marathon recently made a $170 million deal for 70,000 S-19 ASIC miners from Bitmain, which when fully deployed later this year, will up its mining power to 103,000 machines.

This high cost of doing business in bitcoin mining results in low or negative free cash flow and muted earnings, Shimron writes. But the mining companies have for the moment captured the growth of the current bitcoin bull cycle as a result of their spending. (They saw wild trading in the bitcoin boom of 2017, too.)

Now they have also attracted attention from some of the market’s newest forces, as a recent Bloomberg piece noted of the bitcoin miners getting discussed within the WallStreetBets message board on Reddit which fueled the mania in shares of GameStop.

“For investors looking to gain exposure to miners, that beta makes it a great opportunity during the middle of a roaring bull market. …There are fits and starts and pullbacks, but we still have lots of room to grow here,” Shimron said in an interview with CNBC.

Investing in bitcoin in 2021, and beyond

It is the broader bull market in cryptocurrency that has fueled the miners and Shimon thinks that can continue in 2021, driven by macroeconomic and demographic factors. Fears of inflation will support bitcoin prices, and even amid recent yield pressure from the 10-year Treasury which can act on cryptocurrency as it does on technology stocks, he said it is clear from Fed signalling that the central bank wants to keep its dovish policies in place until 2023.

Another driving force is continued adoption of new digital technology and digital assets from younger investors. “You see younger people gravitate to bitcoin and other digital currencies as opposed to gold and commodities and it speaks to a demographic shift. … To them it’s not crazy to interact with money in a purely digital way,” he told CNBC.

Last week, Morgan Stanley became the first big Wall Street bank to offer its wealthy clients access to bitcoin. It limited access to clients with at least $2 million given the risks involved.

There already are ways into the crypto market other than the underlying currencies, such as the exchanges which trade coin and soon will be available to more investors. Coinbase was recently valued at $68 billion in the private market and is planning a direct listing on the Nasdaq.

Waiting for a bitcoin ETF in the US

There are three bitcoin ETFs in Canada, and at some point, there may be a bitcoin ETF available in the U.S. The latest attempt at the Securities and Exchange Commission was filed mid-March by VanEck ETFs, but with investors not holding out high hopes the SEC will approve a bitcoin fund soon, they are looking elsewhere for cryptocurrency investment ideas that go beyond buying bitcoin itself.

Shimon, who ran an early-stage cryptocurrency and blockchain venture fund before joining Fundstrat, said he does view the miners as being a foundation for the crypto space. “The top companies will be here to stay,” he said, pointing to the economies of scale investing in equipment which newer entrants will have a tougher time competing against.

After making the “smart move” during the bitcoin bear market to build out operations, current tech sector supply chain shortages caused by Covid may further help the positioning of these miners after the capital they have already put into specialized machines for the space.

Still, like many traders and hedge funds do with gold miners and small-cap oil explorers, he is inclined to trade the bitcoin miners in a bull market run, rather than see them as investments to hold for the long-term.

The outperformance of the SPDR Gold Shares ETF relative to a VanEck ETF tracking an index of gold miners, since 2006.

Shimron continues to prefer bitcoin as a long-term investment, as well as any ETF ultimately approved by the SEC for U.S. investors. “It is just a matter of time before the SEC approves a bitcoin ETF,” he said. “When a BTC ETF comes, the fees will be low and it will be the safest and easiest way of using traditional rails to get exposure to bitcoin,” he said.

The miners have faced criticism over the huge amounts of electricity required in bitcoin operations, but Shimron’s view comes down to the financials and market performance. (He says there is plenty to criticize about the fiat currency system’s impact on the world, too.)

Even if the bitcoin mining stocks are too high risk for most investors, he is confident in saying that the world of cryptocurrency should be on everyone’s radar. “This is where everything is going. Finance has been the last vestige that hasn’t been touched by the internet,” Shimron said.

In relief rally, bitcoin jumps more than 20% from June low