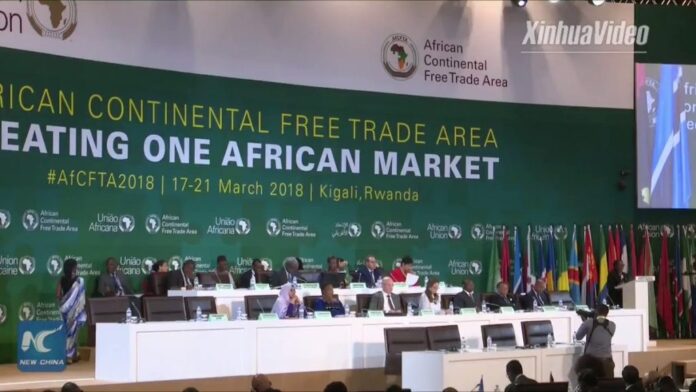 The African Development Bank is actively supporting or looking to support initiatives to boost trade and improve livelihoods for Africans
ABIDJAN, Ivory Coast, March 27, 2021/ — Exploring strategies to deepen private sector participation in the implementation African Continental Free Trade Area (AfCFTA) was the highlight of a panel session during the 2021 WTO Aid-for-Trade Stocktaking meeting.

“The success of the AfCFTA hinges on the ability of African firms to understand and capitalize on the trade related opportunities offered by the AfCFTA,” said Pamela Coke-Hamilton, International Trade Centre (ITC) Executive Director.

The Aid-for-Trade initiative – which promotes the role of trade in development and supports building productive capacities– should focus on three priorities to boost the private sector’s role in AfCFTA: empowering businesses with skills and know-how; fostering multi-stakeholder partnerships to attract investment for greater value addition and enhancing market connections using e-commerce and digital platforms, Coke-Hamilton said.

“This is a trade area of the people, so we need to understand and engage the people to go forward and believe in this dream of an African free trade area,” said Ambassador Usha Dwarka-Canabady, Permanent Representative of Mauritius at the United Nations Office at Geneva and coordinator of the African Group at the World Trade Organization, who moderated.

Discussion focused on boosting private sector involvement in policy dialogues on trade, investment and infrastructure, strategies to increase participation by micro, small and medium enterprises, and the need for greater partnerships to attract investment in promising industries.

Kyerematen proposed that bridging information gaps between governments and the private sector would help build confidence around the free trade agreement and noted that fiscal incentives, including subsidies, might be needed in some instances.

Li emphasized the private sector’s role in speeding up industrial development and economic diversification, particularly in the context of the ongoing pandemic and other development challenges.

“The private sector accounts for 80% of total production, two thirds of investment, three-quarters of credit and employs 90% of the working age population.” He also noted “several determining factors, including an enabling business environment, affordable connectivity, accelerated digitalization and opportunities to forge strong public-private partnerships” as crucial to ensuring businesses’ commitment to trade and invest in the AfCFTA.

The African Development Bank, UNIDO and the ITC have each engaged with the private sector at the continental, regional and sub-national level to facilitate the African business community’s access to the new single market, said Vice-President Quaynor.

The African Development Bank is actively supporting or looking to support initiatives to boost trade and improve livelihoods for Africans, Quaynor said, citing the Ethiopian Commodity Exchange as a model to be replicated across Africa, referring to the commodities exchange established in 2008 that is transforming the country’s agricultural trade.

Quaynor also named AfroChampions, a public-private partnership designed to accelerate economic integration and support the emergence of African multi-nationals, as an initiative that is making an impact.

The meeting comes in the wake of the entry into force of the AfCFTA on 1 January 2021. The free trade area brings together 1.3 billion Africans in a $3.4 trillion economic bloc.

The bloc is the largest free trade area since the establishment of the World Trade Organization, and economists project that its benefits and impacts could lift tens of millions out of poverty over the next 15 years.