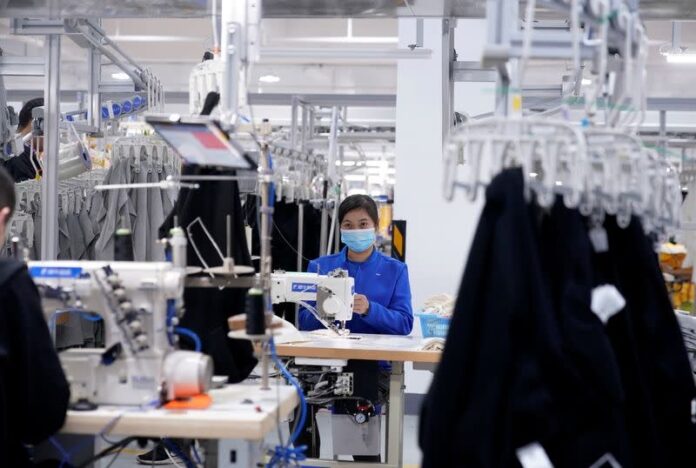 BEIJING — China’s manufacturing activity expanded at the quickest pace in three months in March as factories cranked up production after a brief lull during the Lunar New Year holidays, with improving global demand adding further momentum to a solid economic recovery.

The official manufacturing Purchasing Manager’s Index (PMI) rose to 51.9 from 50.6 in February, data from the National Bureau of Statistics (NBS) showed on Wednesday, remaining above the 50-point mark that separates growth from contraction for the 13th straight month.

Analysts had expected it to rise to 51.0.

“The latest official PMI surveys suggest that after being hit by virus disruptions earlier in the year, growth bounced back strongly this month,” said Julian Evans-Pritchard, senior China economist at Capital Economics, in a note to clients after the data release.

Chinese factory activity normally goes dormant during the Lunar New Year break, but this year millions of workers stayed put due to COVID-19 fears, which led to an earlier-than-usual resumption of business at factories.

Authorities successfully curbed the domestic transmission of COVID-19 virus during the winter, leading to quarantine restrictions and testing requirements being scaled back as life once again returns to normal.

The official PMI, which largely focuses on big and state-owned firms, showed both the sub-indexes for production and new orders stood at the highest level since December.

Capital Economics’ Evans-Pritchard believes the exports momentum could slow over the shorter term, and in turn weigh on the manufacturing sector.

“The current strength of exports is likely to unwind over the coming quarters as vaccinations allow a return to more normal global consumption patterns.”

China managed to largely bring the COVID-19 pandemic under control much earlier than many countries as authorities imposed stringent anti-virus curbs and lockdowns at the initial phase of the outbreak.

That has helped its economy mount a rapid turnaround after a slump at the start of 2020, led by resurgent exports growth as factories raced to fill overseas orders. Factory-gate prices have accelerated at their fastest pace in more than two years, while industrial output has also surged.

This advertisement has not loaded yet, but your article continues below.
Article content
The resurgent COVID-19 infections abroad and constraints in global trade have seen some surveyed firms grappling with inadequate imports of few raw materials, leading to prolonged delivery timeframes, said Zhao Qinghe, a senior statistician with the NBS in a statement accompanying the data.

Makers of cars and electronic devices including from TVs to smartphones are sounding alarm bells about a global shortage of chips, which is causing manufacturing delays as consumer demand bounces back from the coronavirus crisis.

Beijing has set an annual economic growth target at above 6% this year, well below analyst expectations for an expansion of more than 8%.

China’s was the only major economy to post growth last year with an expansion of 2.3%, but that still marked the weakest annual pace in more than 40 years due to the COVID-19 fallout.

Growth in China’s services sector picked up significantly in March, a separate survey showed, as consumers opened up their wallets after months of hesitation.

A sub-index for activity in the construction sector stood at 62.3 as weather turns warm, compared with 54.7 in February. (Reporting by Stella Qiu and Gabriel Crossley Editing by Shri Navaratnam)

Global Dominant Currencies and the Limits of Exchange Rate Flexibility