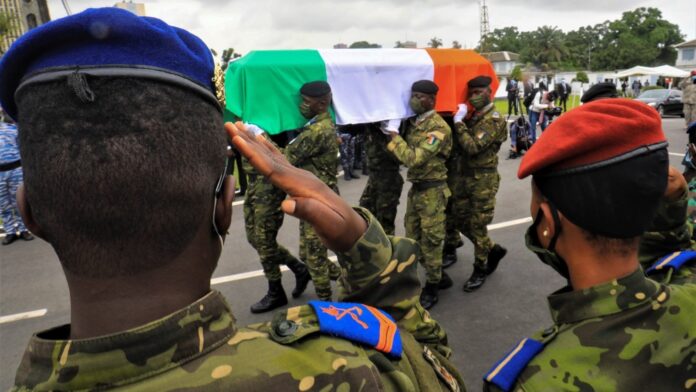 In the early hours of March 29, an estimated sixty gunmen attacked two small military installations in Kafolo and Kolobougou, both located in Ivory Coast on the border with Burkina Faso. The assailants killed at least three soldiers and wounded others.

While no group has claimed responsibility for the attack, the media is speculating credibly that the perpetrators were jihadis based in nearby Burkina Faso, where Islamist groups have been increasingly active.

There have been attacks before in the same area. In 2020, “jihadis” killed fourteen soldiers and gendarmes, also near Kafolo. Nevertheless, concerns are growing that the latest attack is a sign that jihadi insurgents are expanding their reach, as they have in neighboring Mali and Burkina Faso.

In some ways Ivory Coast is the largest and most important country in francophone West Africa. In the decades after independence in 1960, Ivory Coast was an economic powerhouse with wealth mostly based on agriculture, especially cocoa. It hosted the largest French expatriate community in West Africa.

However, political instability after the death of long-time statesman/big man Félix Houphouët-Boigny resulted in coups and civil war, the latest round of which ended in 2011 and left the economy in shambles. Since then, under the technocratic President Alassane Ouattara, the country has largely recovered economically.

Nevertheless, even with renewed prosperity, remaining internal divisions provide an opening for jihadi groups. As elsewhere in West Africa, the south, centered on Abidjan, is predominantly Christian and much more prosperous than the north. In effect, the south dominates the country.

Overlaying north-south differences are those between “indigenes” and immigrants from elsewhere in francophone West Africa, especially Burkina Faso. The indigenes are mostly Christian, the immigrants mostly Muslim.

Hence, Ivory Coast in some ways resembles other African hotspots—such as Mali, Burkina Faso, Cameroon, Nigeria, Mozambique, Central African Republic, and Niger—where a marginalized Islamic population provides an opening for radical jihadism. However, Ivory Coast is far larger and economically more important that the others, with the exception of Nigeria.

If jihadi radicalism acquires a foothold, the consequences will be dire for the West African region beyond just Ivory Coast.