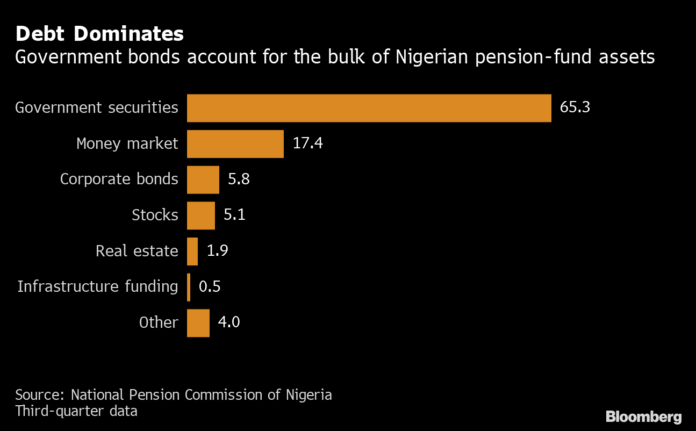 According to the report, most of the pension fund assets were invested in FGN Securities.

However, its share of the total assets moderated to 65.92% (or N8.11 trillion) in the month under review, from a 70.96% (or N7.40 trillion) recorded in 2020, as pension managers moved funds away from T-bills given the collapse of the yields, particularly in the money market, to record low single-digits amid CBN’s accomodative stance to cushion the effect of COVID-19 pandemic on the economy.

As Pension Fund Administrators (PFAs) shifted focus from investment in T-bills, we saw investment preference drifting towards Local Money Market Securities (LMMS) as total funds invested in this space rose y-o-y by 39.61% to N1.65 trillion in January 2021 (lifting its share of the total assets to 13.40%), from N1.18 trillion in January 2020 (or 11.31% of total assets).

However, funds invested in Real Estate Properties as a fraction of the total pension fund assets dropped to 1.29% (or N0.16 trillion) from 2.09% (or N0.22 trillion) in the period under review.

Also, investment in LMMS showed that more pension fund assets were invested in Banks (which include Open Market Operations, OMO, and DMBs fixed deposits) than in commercial papers.

The significant reduction of investment in T-bills amid declining yields amounted to capital gain for the PFAs, as most of the bills were bought at relatively high yields in the early part of 2020.

The increased investment of funds in equities market, long-dated securities and bank placements with relatively better yields also contributed positively to the growth in pension fund despite job losses – unemployement rate hit 33.3% up from 23.1% –, salary cuts and general economic downturn which were expected to negatively impact the growth of the pension assets in 2020.

Hence, we expect the recent increase in rates across the board and further improvement in economic activities (World Bank reviewed economic growth rate of 3.4% across Sub-sahara Africa), to boost returns and increase contributions to pension asset going forward.

Nigeria to form border force with neighbours Benin and Niger to...