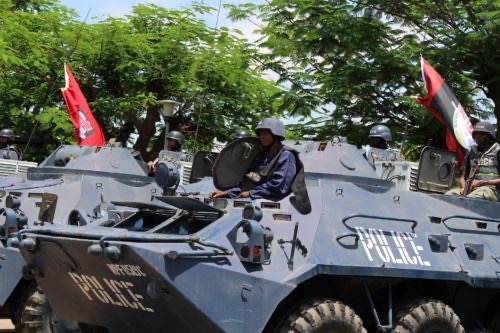 An intelligence source told PRNigeria that the government officials were returning from Monguno, where they went to distribute relief materials to Internally Displaced Persons (IDPs), when their convoy came under heavy attack by the terrorists, who rode on several guntrucks.

The source, said that a security team headed by Chief Superintendent of Police (CSP), Muhammed Ibrahim, as well as a team of soldiers, swiftly engaged the terrorists in a fierce gun battle, which lasted over 15 minutes.

It was gathered that seven insurgents were instantly gunned down, while one was arrested.

The source, added that three soldiers were injured during the encounter, but were quickly evacuated to a Hospital in Maimalari for treatment Bullet.

“The gallant troops furiously engaged the terrorists with superior fire power, eliminating at least seven of them whose bodies have been recovered, while several others escaped with bullets wounds.

“Unfortunately, three soldiers were wounded during the gun battle, and were evacuated to the Hospital in Maimalari,” he said.